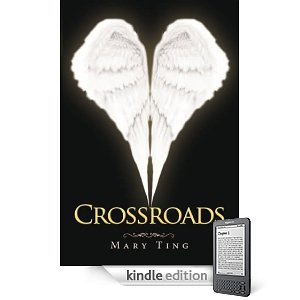 On the same night as the tragic death of a once very close friend Claudia Emerson encounters another world, called Crossroads through her dreams. Whilst in Crossroads she learns about a mix breed of angels and humans called the Alkin. Claudia learns of the supernatural powers that the Alkin possess. Among the Alkin lies evil known as the "fallen" . The Alkin that choose not to follow the Divine Rules. It is certain that because of her ability to go to Crossroads that the fallen will be after her/ So she is assigned a guardian angel named Michael. The leader of the fallen is called Aden, he is convinced that Claudia somehow holds the key to help him destroy Crossroads. Her dream, at times becomes a nightmare, as more secrets are revealed. Who she really is, and the true identities of the people she loves the most.

What a beautifully written book!, It has great descriptions of the things, and places Claudia sees. The battle scenes are so well described you feel like you are part of them too. I love the humorous parts where the Alkin Angels are trying to blend in with the humans.  This book has a touch of everything, there's, action,humour, mystery,and of course a little romance thrown in too. Hmmm for a favourite character who would I choose? Well of course there's Claudia, but then there's Michael and don't forget Davin, Caleb and Vivian. Even though he is a fallen Aden is also a great character you learn lots about the characters. I really could go on and on but I don't want to slip and put spoilers in my review! A definite must, must read!

Crossroads is available at Amazon.com, Barnes & Noble, Amazon.co.uk £12.80 paperback or £4.22 kindle and at Bookdepository £no price listed.

*check out my 100 follower giveaway as there is a copy of this book in it, for your chance to win this book or one of the other 23 books enter the great giveaway!! *

Please see the interview with Mary Ting!
Posted by Jeanz xx at 10:57