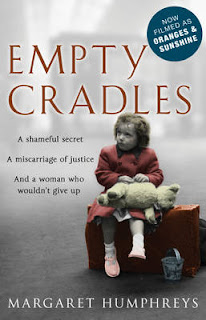 Empty Cradles by Margaret Humphreys (also a film known as Oranges and Sunshine)
In 1986 a social worker from Nottingham, Margaret Humphreys, investigated a case of a woman who claimed that at the age of four she had been put on a boat and taken to Australia. The people that took her ? The British Government. Margaret soon discovered that as many as 150,000 children had been deported from children's homes in Britain. They were shipped off to a "new life" in distant parts of the Empire. The last time this happened was as recently as 1967. For the numerous children it was a life of horrendous physical and sexual abuse in institutions in Western Australia and elsewhere. Margaret tells us how she managed to gradually unravel this shocking secret. Margaret tell how she became drawn into the lives of some of these innocent and unwilling exiles, and how it became her mission to reunite them with their families.
Excellent book apparently  brought out as a film with film tie in book called Oranges and Sunshine. I hope this is one book to movie transfer that really works as it is a serious truth that needs to be told. The child migrants were offered "Oranges & Sunshine" what they actually got was something totally different and not in a good way! Heartbreaking stories of families torn apart and kept apart for years with a few heart warming reunions along the way. Will definitely watch the film when I have chance, I hope it sticks to the book storyline closely as I have said this book and now film has an important message to relay and I hope it isn't lost in the dramatisation of the book to film. Its just a sad shame that possibly families are still not reunited or it is too late to do so even now. What a brilliant woman Margaret Humphreys is to continue this work under extremely difficult circumstances, with her charity lacking funds, threats on her life and threats to her family a true heroine of our time. This book literally makes your heart ache for these people, the ones that have been reunited trying to catch up on lost years, the ones that have missed their chance because of deaths,and finally the ones that are yet to be brought back together. A fantastic book even though its such a sad subject. Margaret Humphrey's is not just a social worker she is a miracle worker the amount of people she has reunited, and how she fought all the way to be able to do so. That lady deserves recognition from the Queen for what she has done. This book will appeal to anyone with a heart and a conscience. I cannot praise it enough. My mother also read the book and felt the same way about it as I did, she said it was a heartbreaking tale.