KISS OF DEATH BY RACHEL CAINE 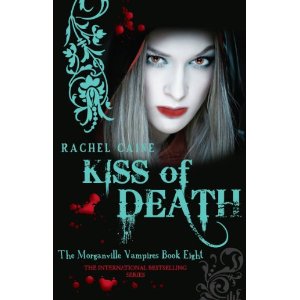 Kiss and Death by Rachel Caine, book eight in the Morganville Vampire Series
This book centres more around Michael and the fact he has attracted "outside of Morganville" attention for his musical abilities. He is allowed to leave Morganville, hardly anyone ever does. The producer that has heard michael's music wants him to cut a demo and play some gigs. For Michael this means having to fit into a more human world. to be allowed to leave Morganville is an enormous thing but it comes with conditions. They are that michael should have an escort. The escort consists of his friends, which is really good and then it includes a dangerous vampire too, which isn't so good......or is it? Will there be a need for that dangerous vampire? You would think with the wide ranging mix of personalities that this trip would be considered the road trip from hell.
I really liked seeing outside of Morganville for a change. A new area, new characters along the way, it made a nice and a little bit of a needed change. Still wanting to read the rest of the series though, there seems to be endless possibilities as to where this series can go.