THE CURSED ONES BY NANCY HOLDER 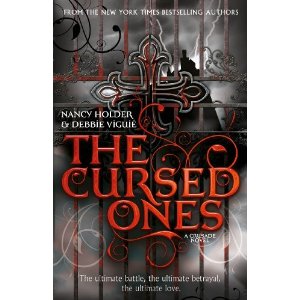 Jenn has lived and trained at Spain’s Sacred Heart Academy Against the Cursed Ones, for the past two years. Jenn is among the few who have pledged to defend humanity or die trying. However the vampires are gaining power, and the battle has only just begun.

Jenn is forced to face returning home after death takes a much loved member of her family. During this trip home,  Jenn discovers that San Francisco is now a vampire strong-hold. Jenn a lone hunter apart from her team, she is isolated and that means shes at risk. Jenn craves the company of Antonio her fighting partner. She also misses what Antonio always offers her which is his protection, his reassurance, his touch.   The problem is that a relationship with Antonio comes with its own dangers, and the more they share of themselves, the more Jenn stands to lose.
Shockingly Jenn is betrayed by one who was once bound to protect her, causing her to doubt all she had held in her heart and mind as true. To survive, Jenn must find the courage to trust both herself and her heart.
I found this book quite different to what else is out there. Yes it has vampires and vampire hunters but they are not in their usual setting and storyline. I enjoyed reading about the well described characters and you genuinely feel for her and sense her heart breaking when she is betrayed by one of the people she ought to be able to trust completely with her life. However Jenn may lack confidence in the beginning as you read you come to realise she is the glue that holds the vampire hunting group together. Each member of the team has their own issues and problems as well as their own strengths and qualities. It is the case they may even distrust one another or bicker between themselves but when they come up against their enemy they become as one united against their foe.
Available from amazon.com, Amazon.co.uk £5.99 paperback and £4.99 kindle, Play.com £3.28 and Bookdepository.co.uk £5.58
Posted by Jeanz xx at 13:50