Delirium is book one of the Delirium Series by Lauren Oliver. 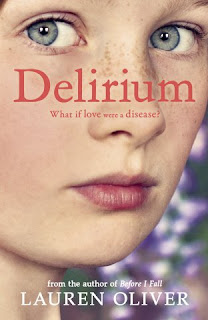 People used to think that Love was a good thing, a beautiful thing. That was before scientists found the cure. People didn’t understand that once love  or "the deliria" as the scientist renamed it, blooms in your blood, there is no escaping its hold. That the "Deliria" takes over your life, every aspect of it until you can't function because of it, so its a bad thing, well ....the scientists say its a bad thing.....and they must be right. Things are different now. Scientists are able to eradicate love, and the governments demands that all citizens receive the cure upon turning eighteen. Lena's mother had the cure over and over again until she committed suicide,her love so great for her husband that she refused to have it removed from her, but she was ill wasn't she?, she had the Deliria didn't she? but the cure is really for the best isn't it? Lena Haloway has always looked forward to the day when she’ll be cured, in fact shes been counting the months and weeks that soon turn into days until her procedure. A life without love is a life without pain: it's a safe, measured, predictable, and happy, isn't it? The "Cure" is something you just have, you don't question it for fear of being declared a sympathiser. We all know what happens to sympathisers, they are taken to the Crypts and are never seen again....or worse sentenced to death.
So with ninety-five days left until her treatment, Lena has nothing to really worry about does she? Well she shouldn't have anything to worry about but Lena goes and does the unthinkable: She falls in love!
She falls in love with Alex the moment she see's him watching her from the observatory in the lab, on the day of her evaluation. The evaluation that is ruined because the sympathisers let a herd of cows that should be headed to the slaughterhouse into the labs. So Lena has to wait and do the evaluation all over again. The evaluation is so important because that determines your score, which in turn gives you your matches that you rank in order of preference then, the scientists collate all the information and decide who you are to be paired with. Lena was ready for all this, she was even willing and kind of looking forward to her procedure but that was before she became involved with Alex.
I will leave my synopsis there as I do not wish to let slip any spoilers. I had wanted this book as soon as it came out and loved the turquoise cover of the hardback, for some reason the paperback cover is of a girls face, I presume its supposed to be Lena. i am not so keen on this cover in fact to a certain point it kind of put me off. Anyway I bought the book in a local supermarket and decided to read it straight away, then a book came in from an author that I promised to review so I didn't get it started that day. When I started reading the book, the pace felt a little slow and I thought I wasn't going to enjoy the book, but the slow pace was necesary to show you the slow pace of the peoples life who had already had the cure. then Lena saw Alex for the first time and everything changed, Lena took risks, something she had never done before. As I said I cannot gor into great detail but Lena finds herself betrayed on more than one occasion in the book by people who she thought she could trust with her life. Help for Lena comes from an unexpected source. I loved the character of Grace who doesn't speak, everyone thinks she can't speak, but she can in fact she sometimes speaks to Lena. I think its great how little Grace is rebelling against the society by choosing not to speak. So to sum up, because I have to sum up even though i feel like I could go on forever talking about this book. So to sum up a brilliant book, that did in parts remind me of Matched by Ally Condie ~ the whole being paired up scientifically, the book also reminded me of Divergent by Veronica Roth ~ with the evaluations that have to be undertaken at a set age. As I loved both those books I loved this one too. What more can I say than go buy it and read it now!