Janelle Stalder is the author of Eden. 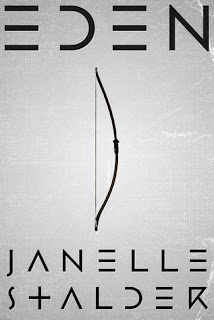 What is your name, where were you born and where do you live now?
My name is Janelle Stalder. I was born in Brampton, Ontario, where I currently still reside with my husband and two young children.


What is the name of your latest book, and if you had to summarise it in less than 20 words what would you say?
The name of my latest book is Eden. To summarize it in as little words as possible, I'd describe it as a coming of age story, set in a fantasy world. It has action, adventure, and romance.


Do you have plans for a new book? Is this book part of a series?
Eden is actually the first book in a four part series. I have the second one already written, although I haven't had a chance to read over it yet. I tend to wait a while after I've finished writing my books until I read them again, so I have fresh eyes for that first time.
How long have you been writing?, and who or what inspired you to write?
I've been writing since I was young, but only started being serious about it about three years ago. It was something I did mostly as a hobby. I've reached the point where I'm ready to have others read my stories and meet my characters. My whole family consists of avid readers, so the love of literature was something instilled in me a long time ago. I love to read, so the next step just ended up being writing.


Do you gift books to readers to do reviews?
I will definitely send my book to those who wish to review it.


How do you come up with the Title and Cover Designs for your book/books?Who designed the Cover of your books?
When I first started writing Eden I had no idea what to name the book. It wasn't until I got to the point in the story where the name of the other world came up, that I needed to think up a name for it. Eden was an obvious choice for me, clearly related to the infamous biblical Eden we all know. It is sort of a play on what our world has considered Eden, and where it originally derived from, which in the story is the actual world that exists alongside our own. There are a few more cross-references between our two worlds like that, which is explored more in the second book. Once I had named the world Eden, I thought it would be the perfect name for the book as a whole. It was simple, recognizable, and memorable.
The cover was designed by my best friend, who also helps me with the design aspect of my blog, and pretty much anything computer related. Me and computers often don't get  along. He had come up with numerous ideas, but I ended up going with the one with the bow. Again, I thought it was simple, which I liked, and it was neutral to me. It didn't seem too feminine or masculine, and it wasn't too juvenile. I like the simplicity of it, and the bow itself has multiple meanings within the story, so it was a perfect fit. That being said, I don't know if it will end up being the final artwork, but if it is up to me it will be. I'm still waiting to see what the publisher says!


Have you ever based characters on people you know or based events on things that have happened to you?
I often base characters on people I know. Sometimes it's simply a name, and sometimes I actually include the physical characteristics and mannerisms of that person. Often times it's only the name, but it ranges. I like the idea of including the ones I love in what I do, so hopefully they don't mind! Events, not so much.


Is there a certain Author that influenced you in writing?
By far the most influential writer to me is Guy Gavriel Kay. He is my favourite author of all time. If only I could write like him! Kay has a way of creating worlds and characters that you cannot help but become completely involved in. I don't think there has been one book of his where I wasn't utterly breaking down at least once. He is simply amazing, and if you haven't read him go out and do so! (and please don't compare my book to his! There is no comparison!)


Which format of book do you prefer, ebook,hardback, or paperback?
I've been reading ebooks more often, mostly due to the convenience of it. Sometimes I can't make it to Chapters, so I get an ebook through Kobo. Nothing beats real books though.


Do you think books transfer to movies well?
I think books are always better than the movies! No matter how good the movies is, the book will always be better in my eyes.


Is there a book you know you will never read? Or one you tried to read but just couldn't finish?
I never finished The Girl Who Kicked the Hornet's Nest. Honestly, I don't know if I'll ever finish it. I think the books are amazing, but I got to the point where I was so sick of bad things happening to the main character, that I just didn't want to read it anymore. I really should read it so I know how it ends, but so far I haven't been able to bring myself to do it.
Are there any New Authors you are interested in for us to watch out for? and Why should we watch out for them?
Moira Young for sure! She just released a book called Blood Red Road and it is amazing! Her style of writing takes a while to get used to, but the novel is amazing, and she has loads of talent. I believe Blood Red Road is a series, so I can't wait to read the next one!


What piece of advice would you give to a new writer?
My best piece of advice to new writers is to keep writing. Most likely you will hear a lot of "No"s in this business, but you can't let that stop you. Keep writing and perfecting your craft, and definitely keep reading!


Where can readers follow you?
Readers can follow me on my blog, janellestalder.tumblr.com. I also have a facebook page, Janelle Stalder, and twitter, jmstalder. I'm not going to lie, I don't tweet as often as I should. However, I do try to blog as often as I can! I'm still new to it all, so I promise I'll get better! I'm also on Goodreads, so please add Eden to your list, and when it is finally released give it a review!
Thank you for this opportunity, and I hope you enjoy Eden when it comes out this fall!
Posted by Jeanz xx at 13:50