Christine Butler is the author of Birthright the first book in The Awakening Trilogy. 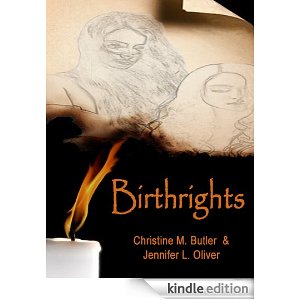 My name is Christine M. Butler. I was born in the United States in Virginia. I grew up a military brat, later joined the military, and then married into the military. Needless to say, I moved around a lot. I have lived in San Diego, California; Everett, Washington; Baltimore, Maryland; Elizabeth City, North Carolina; Pusan - South Korea; Key West, Florida; and I currently reside in South Carolina with my four children.
The first novel I released, Birthrights, is the first book in The Awakening Trilogy. Revelations, the second book, is due out at the end of September; and the follow up to the trilogy, Incarnations, is scheduled for a Feb. 2012 release.
I am also currently working on a short story series, The VooDoo Follies. It is a six part, young adult, paranormal series that follows a teenage voodoo priestess in training as she fumbles through her trials. I have already released two parts, The Source and The Infection. The third part, The Unknown, will be released Aug. 23, with a new release every two weeks thereafter.
From the time I learned to form words on paper I was making up stories and poetry. I've been publish throughout the years in various poetry anthologies, in feature articles for newspapers, and now I am self publishing my stories. I think my number one inspiration for writing has been my dreams. I have always had wickedly vivid dreams and since I can't plug my head into a TV to show people what I see, I started putting everything down in words. I have a huge back list of ideas to work through thanks to my dream journal! I have to thank my family (both near and extended) for always showing so much support for my creative endeavours.
I read a lot. I think in reading so much, and from so many different genres, I am always intrigued by the new ideas and it pushes me a little further in developing my own. When the Harry Potter novels first came out I boycotted them, because the back of the book sounded startling similar to a story I was working on. I remember standing in the store with my mother and daughter looking at books and handing it to my mom with my eyes bulged out. "That's my story!" Eventually, I picked up J.K Rowlings' master piece(s) and was quickly put in my place. The little story I had been working on about a couple of children going to a magical school could never touch on the amazingly creative world she had developed. I think that was a pivotal moment in my own writing. I don't claim any of the stories I have out now are on par with that world, but she made me stop and think.... what if I had gone to those extra lengths? I mean, this woman just invented a new sport! Now, as I am looking at my stories I try to keep that in mind.
Honestly, once I formulate an idea for a story, it's almost as if the title appears out of thin air. It's just there. Now, my chapter titles - that's a different story. I like to play with chapter titles and try to sum up or play with the essence of each chapter with the title. As for the covers, I design all my own covers. Many times a concept will present itself in my mind and I have to go searching for just the right images to use. I am a mediocre artist at best, but I can do some pretty cool things with manipulating images in Photoshop. It's a learning process, so with each new cover I am discovering cool and new things to use for the next one.
My characters aren't necessarily based on specific people. Some of my characters' mannerisms, the way they speak, and certain things about them are a reflection of those people I am around in my day-to-day life for sure, but sometimes one character can become a combination of people. I write fantasy fiction, so while real life events may inspire a scenario or two, I don't think the any part of my stories can be mistaken for reality.
In these hectic days ( I did mention I'm a single mother of 4 children right?) I prefer to read e-books because I can take an entire collection with me everywhere I go. While I say that, I must also add that I have not given up the luxury of holding a book in my hands. My shelves are filled with books. If I read an e-book that I absolutely fall in love with I will also purchase the hardback/paperback to add to my collection. Surprisingly, my teenage daughter hates to read e-books, so paper is the only way we can share now!
I am a huge fan of Patria Dunn-Rowe. We actually struck up a conversation via e-mail a few months back and have become fast friends. She is an amazingly talented author that I believe will go very far in the literary world. She is the author of The Gifts Trilogy which is an amazing YA fantasy trilogy about nephilim (half human/half angels). I would also like to point out D.H. Nevins and her soon to be released title, Wormwood. I was blown away by the preview I was able to read of her book. She is definitely going places and I am honestly shocked that a publisher hasn't snatched her up yet.
Where can readers follow you?
My website:http://www.moonlitdreams.org/I have two blogs on this site, one is a book review blog: Moonlit Reviews, and the other is my personal blog. Christine's Blog has a little bit of everything from camping adventures to my own writing experiences.
The Awakening Trilogy website: http://awakeningtrilogy.moonlitdreams.org/index.html
The VooDoo Follies website: http://voodoofollies.moonlitdreams.org/
Facebook:
My author page: https://www.facebook.com/M00nlitDreams
Moonlit Dreams Fan Page: https://www.facebook.com/pages/Moonlit-Dreams/128458870521953
Twitter: http://twitter.com/#!/M00nlitdreams
Your Goodreads author page? http://www.goodreads.com/author/show/354490.Christine_Butler
Your Shelfari? http://www.shelfari.com/christinebutler

Thank you for the interview opportunity!
--
Christine M. Butler

www.moonlitdreams.org
Thankyou for taking time out of your writing schedule to do this interview and allow us a glimpse into your world of writing.
Posted by Jeanz xx at 18:17