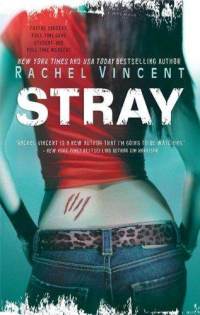 Stray by Rachel Vincent is book one in the Shifter's Series.
There are only eight female werecats left.......and Faythe is one of them. Faythe may look like an all american grad student but looks can be very deceptive ....in this case they are. Faythe is a werecat, a shapeshifter who has two lives really. Her werecat life with her pack and her "normal" human life at college/school. Despite what is expected of her, to marry and stay at home having babies, Faythe has managed to get herself a pretty normal life. her family knowing how stubborn she was had allowed her this piece of normality. Then one day it all changed. it all changed the night that the stray attacked. Faythe knew all about strays, they were werecats without their own pride, they did't belong anywhere and just roamed around doing as they pleased.....until they stepped over the mark and needed to be brought back into line. Faythe manages to fight off the stray that is so attracted to her with the female werecats being so rare. However Faythe finds out that there are two tabbies (female werecats) missing. So she isn't entirely surprised when her pack summon her to return home for her safety. Faythe isn't a quiet, obedient little tabby though, she will take on whoever or whatever gets in her way.
I really loved this book what a brilliant start to a series, I hope the next book is as good. I think it's great to have a feisty female character who doesn't rely on the men to protect her. In fact she has the men tripping over themselves to do anything she wants them to. I can hardly wait to read more of this series. its so well written, it has it all, suspense, drama, a bit of romance, but most of all shifter's. Great series that is so easy to read and literally fly through!