ACROSS THE UNIVERSE BY BETH REVIS

Across The Universe by Beth Revis 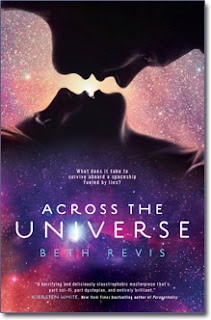 Amy,one of the main characters in this book is frozen in time, and aboard a space shuttle. Amy is there because her parents are important enough to be wanted to occupy a new planet. The space ship, called Godspeed is due to arrive in three hundred years time. Once the ship arrives the people will be gradually unfrozen. Initially Amy wasn't sure she even wanted to go. Her mother insisted that she should and really wanted her to be there but, her father left the final decision up to Amy herself. Amy goes through with her mothers wish and goes through the rather horrible process of being frozen. However things do not go to plan when someone unfreezes Amy, in fact she is lucky to survive the way she is un-frozen. There are many secrets that Amy is not initially aware of...who can she trust? who should she trust? who keeps unfreezing people?
This book was totally different to the other books I had been reading at the time. I liked the whole different idea of a space ship transporting people to populate another planet. It was quite a complicated plot really, but I feel it was well written and easy to follow. After a slow beginning the pace of the book picked up and I enjoyed reading it.