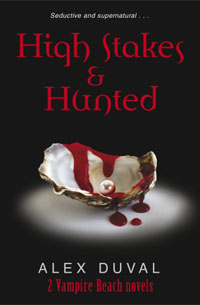 High Stakes is book number five in the Vampire Beach series.
In this book Jason thinks he has taken and passed every challenge that DeVere heights can through, however that is not the case. Sienna's older sister Paige turns up, totally unexpected from her exclusive college in Paris. Is it just a visit or is she running from something or someone? It seems she is running from a rather dangerous boyfriend called Mark. Things take a twist when Sienna goes missing , she is being used as a sort of bait between Paige and Mark

Hunted, book six, the last book so far in this series. In this story, the vampire "jet set" are getting ready for summer. However there peace does not last for long. there's a vampire hunter in town. People begin to mysteriously go missing. When they return , they seem to have no memory of where they have been or what has happened to them either. So what is going on now?

I don't if it's because it the last two (unless author continues with more ) in the series but these had a bit more mystery and bite (pardon the pun, I couldn't resist) for all I have said these are pretty tame in the vampire league of books I did like these two the most, more action, more things to work out. The ending was left in such a way that there could be a book seven. Would I buy a book seven? ...possibly.