Ritual / Legacy by Alex Duval are books three and four in The Vampire Beach series. 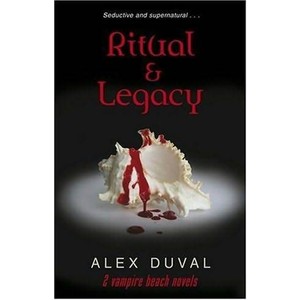 Ritual book three of the Vampire Beach series. In this book Jason is used to the fact that secrets lurk in DeVere Heights everywhere you look. He also knows that most of the population of DeVeres Heights are vampires! Just when he thinks all will be well he is hit by a cross bow. To begin with all the attention jason obtains from his secret crush Sienna make up for all the pain. Jason is especially pleased whe Sienna breaks off her relationship from Bradley. However there is still a lunatic on the loose with a crossbow to think about. The next victim isn't as lucky as jason and ends up with a bolt straight through his heart. Tensions begin to mount at DeVere Heights who is the cross bow killer?

Legacy is book four of the series. In this book life seriously couldn't get any better at all for Jason, he is part of the "in" crowd even though the "in" crowd are all vampires. He has made friends of the vampires even though he has almost been killed twice because of them. He is still madly in love with Sienna of course. Sienna's parents are not happy about that fact at all as he is not one of their own kind...... Jason's Aunt has a solution to his problem but will Jason take it?

These two books had a bit more going on with them. Its not a typical vampire story really, its pretty tame compared to some. But it is an easy read and perhaps an introduction into reading more in the genre. theres a bit of mystery in it. What's wrong with Aunt Bianca, but even that outcome was a bit predictable. All that said the book still makes you want to read on in the next to see what will happen to Jason and his family, so yes, its still a series that is worth reading.