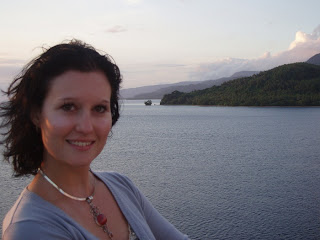 A Little About Jade before the Interview
Jade Hart is a self-confessed book worm who is happiest glued to a lap-top with an eternal battery life and typing up stories running rampant in her head.

Jade currently resides in Middle-Earth with her husband and house-rabbit, but has lived in Australia, England, and Hong Kong. And uses her travels as inspiration for her work.
INTERVIEW


What is your name, where were you born and where do you live now?
My name is Jade Hart. I was born in Hong Kong to English parents and live currently in Middle Earth. I’ve been very lucky to live in England, Hong Kong and Australia and use my travel experiences in my writing.

Did it take a long time to get your first book published?
My first book was terrible so I scraped it. My second, Samsara, earned me a publishing contract with a small publisher, Curiosity Quills. (It’s being released 2013) My third book, Ocean Kills, really spoke to me and I knew I wanted to try and self-publish. I believe in the story so much that I wanted to tell the world, rather than wait 2 years to get a publishing or agent deal.

What is the name of your latest book, and if you had to summarise it in less than 20 words what would you say?
Ocean Kills is published. Blurb: A vigilante with a teleporting gift, hunts the filth of the world, but her plans go askew when she’s arrested by a Sydney cop.
How long does it usually take you to write a book, from the original idea to finishing writing it? Ocean Kills took me 3 months from conception to fully edited edition. I’m very lucky that I write fast and focus on doing a skeleton draft before editing and adding details such as description, emotion, and thoughts.

Which of your books were easier/harder to write than the others?
Ocean Kills was by far the most fun. I really related to Callan and Ocean and love being in their headspace. Hence, why I wanted to make it a long-running series, so I have ample opportunity to stay in their lives.

What can we expect from you in the future?  ie More books of the same genre? Books of a different genre?
Yes, more Ocean Breeze books, along with a few New Adult Contemp Romance. Coffee and Cockpits will be released soon along with another called Anamorphic Sight. I aim to have many urban fantasy books, dappled with contemp romances

Do you have a certain routine you have for writing? ie You listen to music, sit in a certain chair?
Nope, I’m very easy going. I can write in the car while waiting for hubby to finish surfing, on the couch, outside in the garden. Anywhere as long as it is peaceful and no noise. I can’t stand listening to the telly or music while I write. Way too hard to concentrate.

Do you have anybody read your books and give you reviews before you officially release them?ie. Your partner, children, friends, reviewers you know?
Yes, I have many wonderful friends who I’ve met online. Fellow writers who all help make my books better one by one. I don’t know what I’d do without them.

Do you gift books to readers to do reviews?
Yes, feel free to email me: Jadehart888@gmail.com for eARC’s of upcoming books. J The more the merrier.
Do you read all the reviews of your book/books? I’m a little afraid to admit, that YES, I read every single review that is left on GR’s and Amazon. I like hearing what people liked and didn’t and have value each one.

What was the best review you have ever had?
The best review ever was from my first stranger on GR’s. Here it is: This was brilliant. Five stars. It's such a unique story and I was on the edge of my seat the whole time wanting to know what happens next. Ocean and Callan have so much chemistry it's ridiculous. And they make such a great team, despite not really seeing them in action, you just know they'd be so good together.

I love Ocean, she is such a great character. My heart broke for her after I found out what she went through. No wonder she's living her life as a closed off vigilante. She's feisty and arrogant (and hotheaded, I might add). She's kickass, I loved her to bits.

Callan Bliss. What a fantastic name. I really loved him although his many talents were a bit over the top. Also, I couldn't stop laughing how he both chastised and tried to justify himself every time he reached beyond the law. He was a cop!
No, but he was so awesome, too. Super intelligent, cocky and nice. Double-0-Super-Cool. And absolutely fascinated by Ocean. I loved it that he never really gave up on her.

The writing is wonderful, it's packed with action and you are never bored for a second because something is always happening. It takes you to Australia, England, South Africa, Korea, Thailand...wonderful. It's such a fun concept too. Callan and Ocean have completely different voices.
Just so you know, there are some sex scenes in this book. Nothing too graphic, but like everything about this, they're different than usual. You'll see.

Love the cover, it's different than what we see these days. Matches the book, too.

Ugh, the cliffhanger in the end. I need to know what happens next.
And when's the next book coming out?

Do you choose a title first, or write the book then choose the title?
I stole Ocean’s name from an air freshener bottle and thought it would be fun to have the series named after her: Ocean Breeze, and each book be Ocean something or other. So book one is Ocean Kills. Two: Ocean Slays. Three Ocean Hunts… etc.
Have you ever based characters on people you know or based events on things that have happened to you? Yes, there is different parts of me in all my characters in all my books. And the locations are normally based on fact on places I’ve visited or lived. I like to bring my memories and quirks to live by writing them into a story. It’s a fantastic freedom to create what I want.

Thanks so much for having me.

Thank you for taking the time to take part in this Interview for my blog!