GUEST POST - ONE BOOK LEADS TO ANOTHER BY TERRI MORGAN 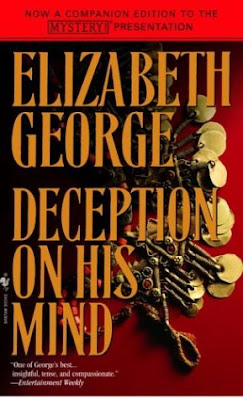 One Book Leads to Another

As an avid reader, and an active participate in my book club, which has met once a month for the past 12 years, it still surprises me how many amazing books and amazing authors there are that I haven't heard of before. Getting introduced to a new-to-me writer is one of the many reasons I love my book club. Everyone in our club has decades of reading pleasure behind them, and collectively, familiarity with many writers in many more genre than I could ever have, even if I spent every waking moment reading and perusing book reviews and news about new books. Their suggestions have led me to some wonderful discoveries. I thought I didn't like mysteries, for example, until Donna suggested we read one by Elizabeth George called Deception on his Mind. I reluctantly agreed after I was outvoted, and was pleasantly surprised when I picked up the book. I was stunned by how cleverly the author wove several intricate plots through the novel, all the while developing fascinating characters that I have since grown to love. I devoured the book, and was disappointed when I reached the end, because I wasn't ready to say good-bye to the characters. My disappointment turned to elation when I realized George had published eight other books prior to Deception, and several since then. I went on a treasure hunt at my local library, and one by one read every Elizabeth George book I could get my hands on. Those that weren't in the library ended up in my personal collection, along with every book she published ever since I discovered her works.
This wasn't the first time I became a serial reader, nor the last. I've often had one book lead to another, starting back to childhood when I discovered Beverly Cleary and Laura Ingalls Wilder. The trend continued through college, when I discovered the works of John Steinbeck, Ernest Hemingway, Irving Shaw, Somerset Maughin and F. Scott Fitzgerald. My serial reading habit has continued throughout my adulthood, and I still get truly excited when I discover another great author who's work is new to me. Most recently, I discovered the work of Henning Mankell, when my book club read Italian Shoes. Donna, who loves mysteries, casually mentioned Mankell's Wallander series, and, once again, one Mankell book led to another, and another, and, well, you get the idea.
My serial reading isn't just limited to great authors. It also involves fascinating subjects. My book club, once again, read Mary: Mrs. A. Lincoln by Janis Cooke Newman, which is a fictional novel about Mary Todd Lincoln, a highly controversial figure who was married to one of America's most beloved presidents. Curious about how much of the book was fictional and how much was factual, I read several biographies about Mary Todd Lincoln after finishing the novel. Both the novel and biographies mentioned one of Mary's few friends, a black seamstress who launched a very successful business after being freed from slavery. Elizabeth Keckley also wrote a book about her relationship with the Lincoln family, so I purchased a copy of Behind the Scenes in the Lincoln White House: Memoirs of an African American Seamstress to get more insight into Mary Todd Lincoln and her troubled life. When I was done with the book I passed it along to another member of my book club, who, like me, is also a serial reader.
This month, my book club is reading The Tender Bar, which is a memoir by J.R. Moehringer. It's yet another book that keeps me reading way past my normal bedtime. As soon as I finish it, you can bet I'll go online and do a search to see if he has any other books out.
Terri Morgan is a book junkie and journalist turned novelist from California. Her novel Playing the Genetic Lottery, was published in May 2012. She blogs on her website at http://www.terrimorgan.net/terris-blog.html
You can contact her at Facebook: https://www.facebook.com/#!/pages/Playing-the-Genetic-Lottery-a-novel-by-Terri-Morgan/192095997524663
Twitter: https://twitter.com/soquelterri
Goodreads: http://www.goodreads.com/author/show/397836.Terri_Morgan