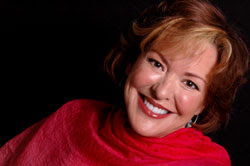 When did you first consider yourself as a "writer"?
I wrote a dreadful poem about a dead dog when I was eight. I was much prouder of that than anything else I've ever done, because I didn't know any better.

Do you have a "lucky charm" or "lucky routine" you follow when waiting for your book to be accepted by a publisher?
I have a lucky thesaurus. Sounds silly. But everywhere I go, I have to have it with me. It's a paperback, and I've had it bound three times. The guy says, "You know, you could buy one like this for three bucks …" but I used to borrow it all the time from my friend Tom when we were cub reporters, and one day he threw it at me and said, “Here, Mitchard, keep it.” Go write the great American novel!

Do you have plans for a new book? Is this book part of a series?
WHAT WE SAW AT NIGHT is part one of a two-part series, with the next book, WHAT WE LOST IN THE DARK, out next year. I'm working on a new book for adults, about a former Chicago cop who rescues a little boy from the Brisbane tsunami and accidentally kidnaps him, becoming his father, then realizing that this kid, while human, has supernatural effect on the emotions of anything living.

If you had to choose to be one of your characters in your book/books which would you be? and why?
I'd be Ronnie Swan from CAGE OF STARS. She's happy. She had a great profession. She completely knows herself, and, despite having gone through great grief, she's in love with a guy who adores her.

What piece of advice would you give to a new writer?
Read everything you DO NOT want to write. If you read what you do want to write, you'll try to write the same thing.

Do you think books adapt to movies well? Which is you favourite/worst  book to movie adaptation?
Yes! I love the way good books and even bad books sometimes become great movies. The best adaptation of a movie to film is 'To Kill a Mockingbird' and Shirley Jackson's 'The Haunting." Despite its being a terrific movie, I think 'The Life of Pi' is a terrible adaptation because it's not what the book is about.

Is there a certain Author that influenced you in writing?
There are three or four: One is Willa Cather, who wrote what might be called a young adult book called MY ANTONIA. The second is Betty Smith, who wrote my favorite book, another book that could be called Young Adult, A TREE GROWS IN BROOKLYN. Another is  Rumor Godden, a wonderful writer who wrote some terrific kids' books and a book about nuns called IN THIS HOUSE OF BREDE. The last one is McKinlay Kantor, who wrote the Civil War book ANDERSONVILLE.