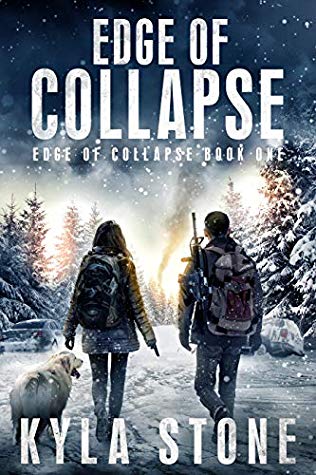 BLURB from Goodreads
In the middle of the deepest winter on record, a super EMP destroys the nation's power grid. No electricity. No cars or phones. Worst of all: No heat. The country is plunged into instant chaos.But for twenty-six-year-old Avery Sheridan, it's the best day of her life. For the last five years, she's been held captive by a sadistic psychopath--until the EMP releases the lock of her prison.Avery emerges from her underground cell into a hostile winter landscape with no way to call for help, no vehicle that will drive, armed with nothing but the clothes on her back and her own determination to survive.Cynical loner and ex-soldier Liam Coleman is headed nowhere fast. He believed he was prepared for any disaster--until the EMP took everything he'd ever cared about in a matter of seconds. When he runs across a fierce, desperate woman who will die without his help, he's forced to make a choice.One hundred frozen, perilous miles stand between them and Avery's hometown in rural Michigan--and the husband and son who believe her dead. But the lack of power, desperate people, and the treacherous elements aren't the only threats.Avery's captor isn't about to let her go. He will hunt her to the ends of the earth and beyond, destroying anything and anyone who gets in his way. For she has something he wants. She's nine months pregnant--with his child.

REVIEW
After reading the prequel of this series I was eager to read the first full length book of the series too. The cover fits well with that of the prequel, I would say it is a scene from within this book featuring Hannah, Luke and the dog is named during the book by Hannah and is called Ghost. The genres that I have seen listed for this book are Sci-Fi and Post-apocalyptic which both fit well though I would also add thriller and suspense.

The book begins with a young woman who we learn is called Hannah Sheridan suddenly being left in darkness in a small locked basement room. The light is usually on 24 hours a day so she is shocked that it has suddenly gone off. She takes a look around the room and notices the silent, she can usually hear the generator & fridge running but they have stopped too. Hannah then begins to take stock of what food and water she has. Hannah is totally reliant on the man who has taken her and put her in this basement. Now the power is off what will happen…Will she starve or freeze to death. Where is he? Has he turned off the power? Is he due back soon? Then she wonders if this power outage could be more widespread than her little prison. She ponders trying to escape then decides against it, as if she is caught attempting escape, he will beat her and break her bones again. He seems to enjoy inflicting pain on her and watching her reactions. Hannah has been tortured at this man’s hand for years, she used to count every day, making a mark to keep track but lately she isn’t sure how long she has been trapped now. Hannah has lost count of how many times he has broken and re-broken the different bones in her left hand, leaving it badly disformed. Gradually it seems to dawn on Hannah if all the power is out then maybe the electric lock panel on the door may not be working. She nervously tries the door and its open. She’s free, or is it a trap, is he hiding somewhere waiting to pounce on her. After hesitating Hannah plucks up the courage to leave the basement and searches around the hunting cabin for warm clothes and supplies, for anything that may be useful to help her in her efforts to get away from this cabin and him.
The book then follows Hannah struggling through the heavy snowfall trying to put as much distance between herself and his hunting cabin, because she knows he will come back to the cabin and when he finds her gone, he will search for her. If he finds her, he will kill her and “it”. Hannah isn’t sure she wants “it”, she can’t allow herself to think of “it” as a human baby. She has a son but it’s different this time round her son was wanted by herself and her husband. Hannah wonders how her husband Noah, and their son Milo are now. It’s been such a long time since he took her from her family that dark Christmas Eve night. Hannah had to plough on and get as far away from the cabin as possible. It wouldn’t be an easy task heavily pregnant and so weak and injured. Hannah uses the survival tips her father taught her years ago, but it’s not long until she finds herself exhausted and in the snow.

It’s just when she is about to totally give up that Liam comes to her rescue and takes her to a wooden cabin he has found where they can stay until the storm eases. Liam is heading to his own homestead and though he tries to ignore this strange, heavily pregnant woman’s plight he cannot abandon her in her obvious “hour of need”. The book then tells of Hannah & Liam’s journey with Gavin Pike, the man who had kidnapped and tortured Hannah for years hot on their trail.

I really loved and respected the character of Liam, who has gone through so much already in Chaos Rising, yet he has that little niggling inner voice that takes on the sound of his sister in law Jessa’s voice challenging all the time to do what he should, to look after Hannah. I really liked the character of Hannah, her grit and determination, the way she copes with the gigantic task ahead of getting back to her family. One that may or may not be there, that may have given up on her by now. Her memories slowly return too, she remembers the night Gavin Pike took her, the fact she had recognised him that night. Though scared beyond belief she initially goes out alone into an isolated area knowing full well that Gavin will come after her. Hannah is pregnant and he will want what he will see as his. He will want to kill both of them. Clearly suffering with the trauma of what she has been through she slowly begins to trust and confide in Liam but then second guesses herself thinking should she reveal anything to him and accept his help when that could mean Gavin Pike will want to kill him too. I absolutely adored the character of the large great pyrenees mountain dog that Hannah cautiously releases, then befriends and calls Ghost.  I suppose I should add even though it sounds a little odd that I enjoyed hating the cruel, sadistic Gavin Pike as well as his character is so well written.

To say this book is action packed is an understatement! When I first started reading the book, being introduced to Hannah I was wondering how the post-apocalyptic was going to fit in, I thought it was going to be more about just Hannah’s kidnap and the criminal elements of what Pike has done to her, I was envisioning a Criminal Minds episode. However, this book really has it all! It has the thriller, kidnap, suspense, sci-fi, prepper and post-apocalyptic themes all rolled into one great plot.
Once you start reading this book you really don’t want to put it down. I loved the writing style and the prepper tips and tricks that Hannah and Liam have to use and rely on to survive. Then there’s the different characters they meet along the way, those they attempt to avoid and those they need to win over for help. It takes a long time for Hannah to fully trust Liam and to reveal her own story of torture at the hands of Gavin Pike. Then there’s the poor, ill cared for dog that “guarded” Gavin Pike’s hunting cabin. The one Hannah calls Ghost as he seems to silently turn up when she is in need. In fact, Liam has a hard time winning both Hannah and Ghost over and getting them to trust that he is one of the good guys. I don’t want to reveal much more about the book but there is a section when I became rather upset when one of the main characters is quite badly hurt.

My immediate thoughts upon finishing this book were that I shouldn’t have had any doubts about the kidnap of Hannah element at all and that I definitely enjoyed reading this one, not entirely what I had expected ....post-apocalyptic with the thriller, killer, criminal, kidnap, suspense and race against time elements thrown in too, but a totally amazing read.

So, to sum up I loved this book and I am sure it will appeal to a wide range of readers. Also I am really eagerly awaiting the next book! 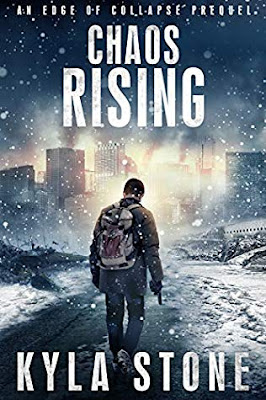 In a heartbeat, everything grinds to a halt...On Christmas Eve, the lights go out. Vehicles stop working. Communications break down.Reclusive former soldier Liam Coleman doesn't want to be anywhere near bustling downtown Chicago the day before Christmas. But his twin brother and his pregnant sister-in-law need him, so he makes the trip.But mere minutes after leaving O'Hare, their car crashes, along with hundreds of other vehicles. When Liam's phone stops working, he begins to suspect something more sinister than a local power outage. But before he can react, the first plane falls from the sky...

REST OF THE SERIES TO COME! 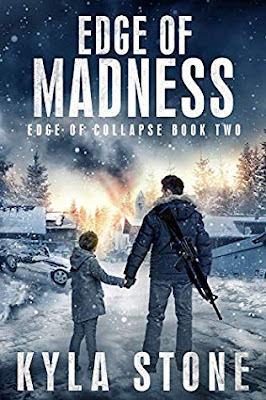 BLURB
A devastating EMP. No power. No communication. And no help...


On the five-year anniversary of his wife Hannah's disappearance, small-town deputy Noah Sheridan takes his young son Milo to a local ski resort for some much needed father-son time.

In a blink, the power grid goes out. So do the resort's brand new generators. Noah and Milo find themselves trapped on a chairlift thirty feet above the ground.

Help is not on the way. Night is coming, and with it the killing cold. Getting down before hypothermia sets in is only the beginning...
When an impending blizzard cuts off the town from the rest of civilization, it'll take everything Noah has to keep his family and friends alive. The only things more dangerous than mother nature's wrath are the desperate people willing to do anything to survive.

Goodreads Link
My review will be coming soon! 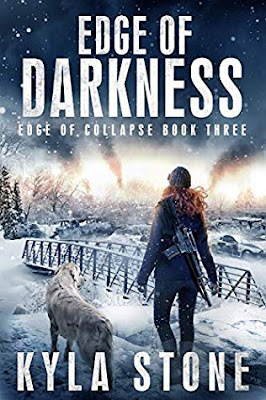 BLURB
A world without power, lights, transportation...Liam and Hannah continue their dangerous journey home. But they're hunted by a deadly adversary. Back home, Noah fights to protect both his son and the town of Juniper Springs, though someone is sabotaging his efforts. 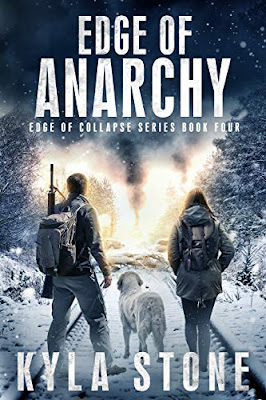 BLURB
After battling blizzards, hypothermia, and hundreds of miles of dangerous wilderness, Hannah comes face to face with her worst nightmare. Is she strong enough to fight for what she loves most? 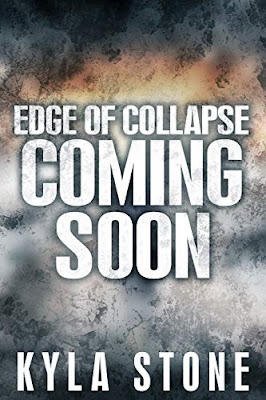 BLURB
The EMP stole their way of life. They've survived the brutal cold and violent enemies. But the threat to Fall Creek has never been greater. To survive this battle, Liam and Hannah will have to sacrifice more than they ever thought possible. This time, it might be too much...