REVIEW - EDGE OF DARKNESS - EDGE OF COLLAPSE BY KYLA STONE 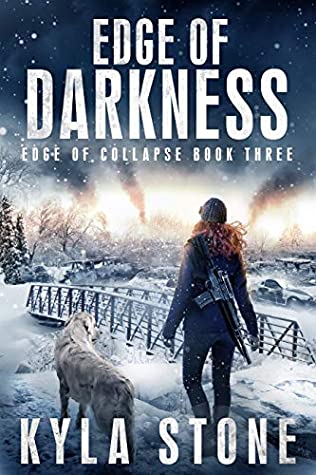 BLURB from Goodreads
A world without power, lights, transportation...Liam and Hannah continue their dangerous journey home. But they're hunted by a deadly adversary. Back home, Noah fights to protect both his son and the town of Juniper Springs, though someone is sabotaging his efforts.

REVIEW
This is another highly addictive series I am really into at the moment, so as soon as I knew it was available to read, I wanted it! I ended up with a migraine with all the stress of the present situation in the world or I would have read it even quicker than in three reading sessions. I warn you it will be one you will hate to have to put down!

I think the covers are really great, well thought out and represent the series well as well as being cohesive as a series too. The genres I have seen listed I totally agree with as being post-apocalyptic, along with some mystery, a lot of thriller like sections with a little suspense thrown in all because something has happened, in this case an EMP and ripped people out of their comfort zone and some element go out of control. It makes for a fantastic mix to read that should appeal to a wide audience. On another note all the food shortages and illness with not enough medication and other problem from within the book have become even more believable when you compare it to our world at the moment.

In this book the whole gang of characters are back to being featured. We get Hannah & Liam still trying hard to stay one step ahead of Pike who is still ruthlessly trailing them intent on revenge. Hannah & Liam have to make the difficult decision of whether to stop to get the treatment that Ghost badly needs.
Then there is Noah heading into a strange situation where certain people he would have trusted with his life are soon seen in a different light. There’s the aftermath of the Crossway Massacre where Noah’s own son Milo only made it out alive thanks to the quick thinking of Quinn and a sudden hesitation, maybe a small act of love from her mother Octavia.
Fall Creek wants retribution, but in what form. It’s already been proven that a jail cannot hold this local gang, and why should they sit in relative comfort and be fed everyday whilst locals do all the work finding what little food is available. A decision is made by Superintendent Rosamund Sinclair and Sutter the man in charge of the heavies she has brought in to protect Fall Creek. Its not a punishment that Noah is comfortable with but how can he argue with Sutter when it is him and his men that have sourced and brought back vital medication for his son Milo.
Sutter and his men are put in charge of collecting “tax” in the form of 10% of any food supplies people have in their home. This has also been rubber stamped by Rosamund Sinclair. When the men arrive at Molly and Quinn’s home, they seem to enjoy antagonising them and go further taking over half the supplies Molly has built up by canning and prepping for years. When Quinn protests, she is just threatened and her grandmother tells her to be quiet, fearful of what the men could do.
Molly continues helping out her local neighbourhood, explaining to them how to purify water and sending them a little food. Molly enlists Quinn & Milo into delivering the packages. Its on one of these deliveries that Quinn makes a grisly discovery, which she once again bravely shields Milo from.
There’s an out break of stomach issues due to people not boiling their water enough which means Noah, and best friend Julian going out on a search looking for medical supplies. Julian isn’t impressed when they are joined by another friend of Noah’s (who I won’t name as it, kind of could be a spoiler). It is this third person that eventually realises somewhere they may find the medical supplies they need and others may not think of trying there. All the Doctors surgeries and Hospitals are either empty, little or no supplies, or have been requisitioned and taken to the nearest FEMA camp.
I could seriously go on and on, so much happens with both sets of characters yet they have yet to all meet up in person. This book left me with so many questions as not everyone agrees with how Rosamund is running the town with her heavies, the fact they all have power, heat, and running water in the houses they have taken over in Winter Haven. Some of the Winter Haven Homes only housing one person despite having four bedrooms!! When Noah asks Molly and Quinn to move in with him and Noah, Molly immediately refuses saying she is used to her own home she shared with her husband and her and Quinn can manage how they are. Molly isn’t so keen on how Fall Creek is being run and despite stopping Quinn from getting in an argument with Sutter and his men I think she has a plan or two up her sleeve.
I don’t know which side Noah will end up on, for his sake and his sons, Milo, I hope its on the “good” side which I personally think will be tied in with whatever it is Molly will come up with for the future to help her friends and neighbours. I think Noah has some difficult decisions coming soon and though she may say she loves him like a son, I think Rosamund will do almost anything to make him toe the line on her side. Noah is well liked in the community, so that reflects well on Rosamund. With Noah appearing to be in favour of her rulings the rest of town follows someone they like and respect more easily. So far Noah has been one of my favourite characters but dependent on what happens next, I might have my mind changed about him. Perhaps he is in need of a little back up from my other favourite character, Liam. I can’t wait to see how things will change in the next book.

My immediate thoughts upon finishing the book were, Oh wow! Scarily realistic on how people behave when things go wrong. This series honestly just keeps getting better & better!
I have so many thoughts on what might be in the near future for Liam & Hannah ... as well as Noah, Milo, Molly & Quinn and the rest of Fall Creek....so many possibilities.
So strange to be reading this during the current situation we are living through!!

To sum up. . . .hmm brilliant book containing all the characters with lots happening on both sides. This seriously is a must-read amazing series. I just want to read even more right now!