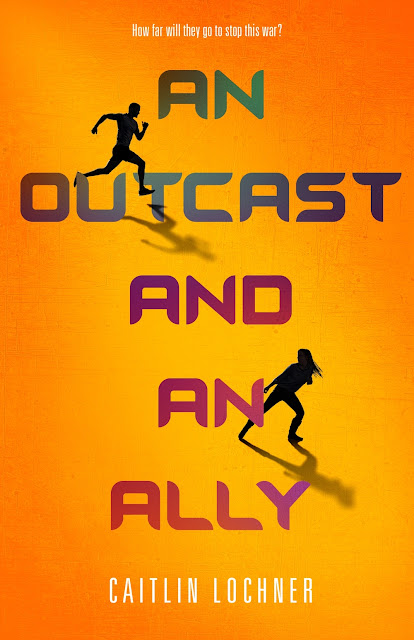 BLURB supplied by Xpresso Book Tours
Lai, Jay, Al, and Erik are on the run after the military accuses them of being traitors. Tensions between everyone are high, but they have to stick together if they want to survive. And somehow stop the war that’s now in full swing.
But when Erik returns to the rebels to find answers about his past, Lai, Al, and Jay have no choice but to go to the Order―a peace coalition bent on stopping the rebels and dissolving the enmity between gifted and ungifted. However, the longer the war drags on, the more Lai’s long-kept secrets threaten to destroy everything she’s ever worked for. Sparks fly as the team constantly questions whether they can trust one another and everyone tries to navigate a war that will change everything.
Filled with the same high-stakes superpowered action and complex relationships as A Soldier and A Liar, Caitlin’s first book, An Outcast and an Ally brings this story to a dramatic and satisfying close. 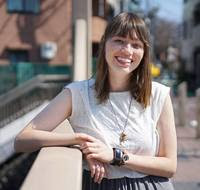 I’m a nerd, traveler, and architecture enthusiast who worked as an assistant English teacher in Tokyo for three years before pursuing my MFA in Creative Writing at the University of Central Florida. I love reading and writing anything with magic, adventure, and complex found-family relationships. I can typically be found absorbed in books, games, or manga, or else obsessing over said books, games, and manga.

Did you do a lot of research for your A Soldier and a Liar Series?
Not too much! Most of my research was for little details, like how long certain wounds would take to heal, military ranks, info on different kinds of weapons, how to apply a tourniquet, that sort of thing. Since so much of my world and systems are made up, I didn’t have to worry about realistic accuracy on those.

Did you have to do any specific research for A Soldier and a Liar? If so what/how did you do it?
Nothing in particular, I’m sorry to say!

Who designed the covers of A Soldier and a Liar and An Outcast and an Ally? Do you have a lot of input in the process?
The wonderful Katie Klim (https://www.katieklimowicz.com/)! She’s designed a ton of gorgeous covers, so I really recommend checking out her work. I had some input, but the way covers work for Swoon Reads is a little different from most imprints. For A Soldier and a Liar, Katie designed three different covers and the Swoon community voted on their favorite. We made a few small adjustments after that, like changing the figure to a more soldier-looking silhouette, but for the most part, it stayed the same. Katie designed the cover for An Outcast and an Ally to match the first book’s, and again, I was able to give some input, but the overall concept stayed pretty much the same.

Do you have a basic plot/plan for each individual book in the series before you actually begin writing it all out? Or do you let the writing flow and see where it takes the story?
A bit of both! I think it’s hard to plan out an entire series from the very beginning because so much changes during revisions on a book. We changed the ending of A Soldier and a Liar four different times during edits, and the final time was such a dramatic change it that forced me to throw out about half the plot threads I’d originally been planning on using in An Outcast and an Ally. They were just no longer feasible with what had happened. But even though that really changed the course of how certain events went down in my second book, the overall plot and ending remained the same as I’d planned since the very beginning. And there are some things I figure out as I write. As long as I have my end goal in mind, and a general sense of the path of how I need to get there, sometimes I let the discovery of the route happen as I’m drafting. It requires more revising in the next drafts, but I find it a more fun way to write when I don’t know everything that will happen.

Do you have a favorite character from the A Soldier and a Liar series? If yes, who? Why?
I know you’re not supposed to have favorites among your children, but I absolutely do! I love all my characters a lot, even the minor ones, but Al is definitely my favorite. I really admire this character’s strong sense of justice and straightforwardness; I envy that ability to unapologetically be exactly who you are and not give a crap what anyone else thinks. Al is also the emotional heart of the team in a lot of ways. Jay is the leader of the team, and Lai the mastermind behind most things, but at the end of An Outcast and an Ally (very minor potential spoiler ahead?), when everything seems about to fall apart, it’s Al who steps in to remind everyone of what’s most important.

If you could choose to have one of your characters’ superpower, which one would it be and why?
Probably Erik’s telekinesis since it’d be cool and convenient in pretty much any kind of situation. I don’t think Al’s pyrokinesis would be very useful for me in my life (except to light my candles I guess?), and I’m definitely too much of a coward to know what everyone’s thinking all the time like Lai. Jay’s ability to sense people’s presences, their emotions, and whether or not someone is lying would probably be my second choice.

Did you have a playlist for either of your books in the A Soldier and a Liar series?
I do! I had a pretty set one for A Soldier and a Liar, but An Outcast and an Ally’s was more all over the place. There was some overlap between the two playlists because a lot of the songs were still really fitting for the second book, but there were also a lot more songs that I would get tired of and drop off my playlist for An Outcast and an Ally. The track list changed quite a bit, and there wasn’t really any consistency in tone/overall aesthetic, haha.

Where can your readers follow you?
I don’t go on social media too much because I have social anxiety like no one’s business, but I try to update whenever anything big happens! Especially on the blog on my website. I also really, really love getting questions and having the chance to talk to readers, so please feel free to reach out over any of these sites! I’m much better one-on-one, I promise.