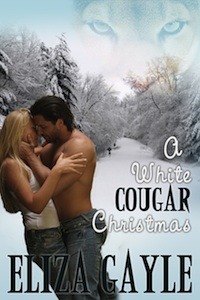 BLURB from Goodreads
Restless and alone on Christmas Eve, Niki decides it’s time to scratch the itch and heads into a nearby town for some action. Once there, it isn’t sex she finds, but a fight instead, that is until tall, dark and handsome intervenes…


Dean recognizes the stunning but surly Cougar for what she is the minute she gets close. Now it’s up to him to show her just how far a night of passion can go.


I felt like I needed a short festive read so when I saw this I thought it was a shifter novella, however it isn’t quite that it is described on Goodreads as a free chapter prequel to the full novel Be Were. I thought I would give it a try. As it’s part of a series and by an author I haven’t read before I thought it was a good way to see if I liked the pace, writing style and characters featuring in the series too.

The cover shows a couple kissing with a background of snowy landscape and the kind of shadow image of a wolf. Knowing my love of shifter books, I totally admit it was the wolf that attracted me to the cover!

The books two central characters are Nikki and Dean. In the world in this book shifters exist but the general public are unaware of this so its important to hide the fact you are a shifter and not stand out or do anything to raise suspicion.

Nikki is in a bar both wanting and needing to let of some steam. Its almost Christmas and Nikki is certainly not relishing being alone at Christmas this year. Whilst she is having a drink, a rather irritating drunken man tries to latch on to her, despite her rebuffs he continues to try and get a rise out of her and is becoming rapidly over friendly. Though Nikki is handling the situation she is close to snapping, and I get the impression she wouldn’t think twice about snapping the man’s neck with how wound up she is. If he starts a fight Nikki may well finish it and it won’t end well for the human man at all. Nikki can feel her shifter instincts coming forth when she hears a male voice advising her not to do what she is about to, and that they don’t need trouble. Nikki senses this new male on the scene is also shifter, and basically after a little playing hard to get from Nikki to test how alpha this possible hook up is she goes off with him. Little does Nikki know the male, Dean, has already recognised her as his mate and it will be no one night stand as he intends of making her his mate forever.

The sample was short and a little steamy. I think I would give this series a closer look. Though the event/story within this chapter sort of completed it did do its job and made you feel encouraged to read more about Nikki and Dean and their future.
It was a super quick read. I had thought there may have been a bit more content but this chapter basically covered how Nikki & Dean met.

I do want to check out the series this chapter is from and think I will enjoy it. The only thing putting me off is seeing that some readers have labelled it as erotica and I don’t enjoy reading erotica. A steamy story is ok but too much erotica in a book puts me off. I guess what I am trying to say is I like the steamy scenes incorporated into a great plot and story rather than being there for the sake of it. The only way to find out I guess is to give one of the books a go.