REVIEW - TWAS THE NIGHTSHIFT BEFORE CHRISTMAS BY ADAM KAY 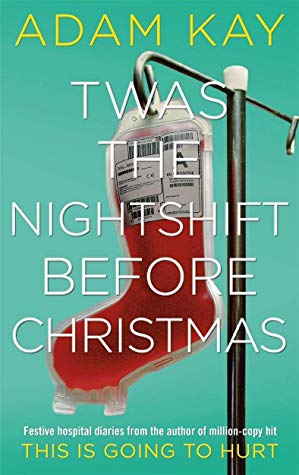 BLURB from Goodreads
Twas The Nightshift Before Christmas is the hilarious, poignant and entertaining story of the life of a junior doctor at the most challenging time of the year. With twenty-five tales of intriguing, shocking and incredible Christmas incidents, the British public will finally appreciate the sacrifices made and the challenges faced by the unsung heroes of the NHS.Twas The Nightshift Before Christmas will be fully illustrated (as tastefully as possible) and will delight all of Adam’s fans throughout the festive period of Christmas 2019 and for many years to come.


I had looked at this book on Amazon before and thought maybe I should give it a go, but the final push that had me going to buy it was when an old school friend read it and she was saying it was really making her laugh and to be honest coming up to reading this one around December, I needed a bit of humour, its not a great time of year for me. So, I took the plunge and bought this one along with other titles by this author.

The cover is a funny, medical take on a Christmas stocking which I think works well. The Christmas stocking shaped “blood bag” hanging on the drip stand certainly caught my eye! The genres of comedy, medical, memoir and autobiography fit the book well.

Adam Kay is a poor, single doctor who seems to endlessly end up working every Christmas holiday due to other staff having children or the cunning to somehow wrangle the time off. Within the book Adam does a total of six Christmas Holiday shifts. He does give a little background into the medical profession hierarchy, amusingly comparing the medical ranks to that of Mrs Beeton’s 1861 Book of Household Management.
The ranks correspond as follows:
House Officer – Scullery-maid/Stable boy
Senior House Officer – Maid/Groom Registrar
Upper Housemaid/Footman
Senior Registrar – Housekeeper/House steward
Consultant – Master/Mistress of the house

Adam explains that at this stage in the book and his medical career he is a house officer which according to Mrs B means the scullery-maid or stable boy would perform functions too menial or mucky for other members of the household which Adam points out is actually a fairly uncanny description of a house officer’s role. Mrs Beeton reveals the scullery-maid/stable boy would expect an annual salary of between £5 and £12. Adam jokingly agrees that his salary is not far off his own.

Adam reveals that in 2004 one anaesthetist wore a badge on Boxing Day saying “He see’s you when you’re sleeping, he knows when you’re awake” which is kind of appropriate not just for Santa/Father Christmas but of course an anaesthetist too!
Adam on occasion wears a Christmas themed tie that when pressed plays Jingle Bells which you would think is funny, sadly it seems to “set off singing” at some rather inopportune moments!

Adam also reveals how the pressure of him working every Christmas affects his home life and relationships. His other half isn’t always as understanding of his work demands, and family tends to guilt trip him for something he truly has no real control over. Adam does reveal how one couple who work at the hospital manage a snatched Christmas Dinner in a hastily prepared snack room, when one of them is working and the other is not but turns up with some dinner to have together. All of course with the permission of the working medics superior’s permission.

I don’t really know how I thought decisions were made in hospitals about who would work Christmas Day, Boxing Day and New Years Eve, New Years Day. I guess I should be a little ashamed it had never crossed my mind. Then when I did think about it whilst reading this book, I presumed it was on some sort of rota basis, so no one ended up working Christmas every year! I was shocked by the story of a member of staff having a death in the family and only managing to get the time off for the funeral because two colleagues stepped up and split her shift between them selves allowing her to attend the funeral of her loved one.

Adam reveals that A lot of the reward for this job comes in the form of a warm glow. It doesn’t make you look any less tired, you can’t pay the rent with it, and it’s worth a lot less than the social life you’ve traded it for, but this comforting aura of goodness and purpose definitely throws light into some dark corners and helps you withstand a lot of the shit.

Another Christmas when Adam once again finds himself working, he reveals he once asked a medical student to shave a patient before an ECG. Fuck (sorry there are cuss/swear words within the book. Though I would add some of the situations that Adam finds himself in would more than likely make a saint swear/cuss) knows what the poor patient thought was happening when the student came into his cubicle, removed his five o’clock shadow and tidied up his sideburns.

Adam mentions quite enjoying working on the labour ward one Christmas and how those giving birth tend to give their newly born infant “Christmas type” names such as Holly, and Gabe. There’s even a joke that Noel used to be a popular choice until Noel Edmonds came along!
Be prepared if sensitive to the subject of miscarriage and/or failed IVF treatments are also covered within the book, sensitively. I liked and wholeheartedly agreed with Adam when someone used the term “just” when referring to how many weeks pregnant a woman was when she was miscarrying. Adam becomes quite annoyed on behalf of the patient saying in this specific chapter that there is no “just” there are no degrees of pregnancy, a loss at any gestation of pregnancy is a loss. There is also an occasion where a pregnancy loss occurs behind a screen, where on the other side people are counting down to the New Year and start singing and cheering.

I feel like I could talk forever about this book and I am certainly going to be reading some of Adam’s other books! I really enjoyed the witty way Adam tells his stories, you can almost visualise him standing there in front of you and hear his voice telling you them. I guess the book is done in a friendly, conversational and almost "the revealing of a secret" style. You feel like you are being given a peek behind the medical screen/curtain into what really happens. All the procedures mentioned from an ECG, to Obstetrics terms are explained in footnotes at the bottom of the relevant sections of the book. I loved Adam’s references to Harry Potter within the book too. For example, when he says that he thinks of the Health Secretaries as being the Defence Of Dark Arts Tutor from Harry Potter! There are illustrations in between the Chapters that are brilliant and add even more to the book.  Adam accredits them to the artist Steph von Reiswitz calling them inventive, ingenious illustrations and he adores them. I have to say I think they are brilliantly thought out, and are beautifully drawn.