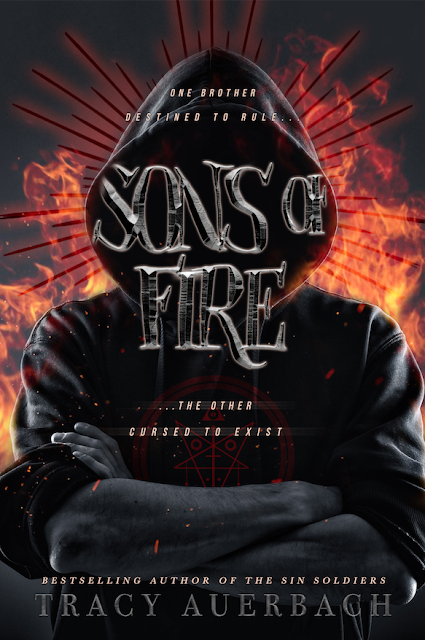 BLURB supplied by Xpresso Book Tours
When Keegan’s father, the Demon King of Fire, attempted to produce an heir, a surge of light energy interrupted the process. One tiny piece of the newly forming demon broke off. That piece is Keegan. For years, he has attempted to lay low, watching from the shadows while his monstrous brother Aidan, the true Prince of Fire, is groomed for the throne.Keegan’s shaky status quo is shattered when one of his father’s power-plays goes horribly wrong. He is cast to Earth and forced to work with a suddenly powerless Aidan. The two brothers must cooperate to complete an impossible task and avoid being cast forever into the abyss. As if having to spend time with his beastly other half wasn’t bad enough, Keegan must adapt to living on Earth, wielding his new human vessel, and dealing with his demonic appetite without harming the human creatures for whom he has always cared.As Keegan and Aidan work to save themselves, questions arise. What exactly was the King of Fire up to, that sparked their Master’s interest enough to cast them from the Demon Realm? Can Aidan be trusted in his new human form, complete with emotions, or is he the same unfeeling creature he’s always been? And why are so many demons suddenly invested in the outcome of the brothers’ trial? The only thing Keegan knows for certain is that whether he succeeds or fails at the task, the consequences for the Demon Realm and for Earth itself will be catastrophic.
Goodreads Link
Purchase Links
Amazon US
Amazon UK
B&N
iBooks
Kobo
Google Play

Tracy Auerbach is an author of science fiction and fantasy for teens and adults. As an avid reader with a vivid imagination, she chose to study film, English, and education, and went on to teach and write STEM curriculum for the New York Department of Education. This helped to polish her writing skills and ignite her passion for science fiction and fantasy. Her first scholarly article, published in Language Magazine, was about the value of active, creative learning in science.On the fiction side, Tracy’s work has been featured in the online literary journal Micro-horror, The Writing Disorder fiction anthology, and the “(Dis)ability” short story anthology, in addition to her novels.When she is not teaching or writing, Tracy is usually reading or spending time with her family. She lives in New York with her husband and sons.

Adramelech, King of Fire, stood before all the souls he had gathered, admiring the fruits of his labor. Collecting and shepherding them to his realm had taken work, but it was nothing compared to all the time and effort he had expended to reach this moment: his moment of triumph. The pale energy orbs of the damned, thousands of them, floated above the parched brown floor, drifting aimlessly, bumping into each other or into the black-hot walls of stone around them. The stage was now set for him to finally seize control from his impotent ‘Master.’
“Come to me, Fire,” he called.
A moment passed before his offspring shimmered into being several paces away. The Prince cast a vacant stare upon Adramelech, awaiting orders. The young demon’s strong torso was bare, his dark hair hanging over the translucent skin of his face. Dragonfire swirled beneath the skin’s surface, lending the impression of movement to his form. His eyes were black with hunger while his handsome, human-like figure swelled with power.
The offspring was a paradox of mental weakness and physical fortitude that had taken two hundred years to create and shape. But now it had, at last, come to fruition and Adramelech knew that his efforts had been well spent. The being before him contained so much power that it only held its pretty visage through sheer force of will. And still it wanted more. Always hungry, always obedient, always his.
“It is time, my Fire,” crooned Adramelech. “Do you understand what you must do?”
The boy-shaped demon nodded.
“First, I will give unto you what remains of my power. When I leave, you must follow the instructions exactly as I have lain them out. Remember, above all else, that it is still my power. I will not become another Lucifer, who cast his strength into a sword and imprisoned himself in ice for all eternity. My sword will behave. If you fail, I shall be forced to resort to my back-up plan. And believe me that the alternate arrangement is something you would not want to experience.”
The Prince nodded, eyes still dull and hungry. Adramelech knew his Fire would not speak unless he himself requested it.
“Do you have any questions?”
The demon shook his head.
“Then let us begin.” Adramelech willed the power within every molecule of his own form to flow to the surface, watching his creation’s eyes glow in anticipation. Indeed, the only time his heir came to life was when a large feeding was expected. The boy-shaped demon opened its mouth as Adramelech began to speak. “I, Adramelech, Son of Lucifer, offer a portion of my power unto you.”
“I, Fire, Son of Adramelech…” the Prince began.
“You must include the ridiculous human title Paimon bestowed unto you,” Adramelech corrected. “It is your written name and therefore necessary for the ritual.”
“I, Aidan Fire, Son of Adramelech, accept the power and take it unto my form to hold, so that Adramelech, King of Fire, may wield both it and I as he sees fit.”
Adramelech focused his power into a beam of energy and shot it toward his creation. Even as the Prince’s power swelled and his eyes turned the golden hue of Dragonfire, he accepted the gift hungrily. Adramelech considered all that he had wrought and was pleased.