REVIEW - RISING - AFTER THE THAW BY TAMAR SLOAN & HEIDI CATHERINE 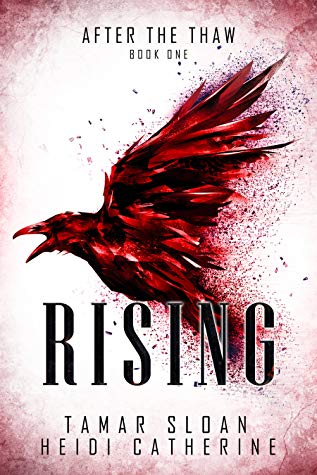 Only the chosen shall breed.

Humans now live in a super greenhouse. Seas have risen. Oceans have acidified. And the fight for resources is deadly. To ensure nothing of this magnitude ever happens again, only those with enough intelligence and heart will earn the right to bear children and heal the earth.

Nine teens must face the tests of the Proving to decide who will be Bound to this new order. Four of them will challenge the system in ways even they can’t imagine.

Nova. The gentle soul who has everything to lose.

Kian. The champion of this new world who’s determined to succeed.

Dex. The one who'll learn nothing is as it seems.

Wren. The rebel who wants nothing to do with any of it.

After reading and loving the prequel Burning, I was certainly eager to read Rising the first book in the After The Thaw Series.

I really love the covers of the book series, featuring the birds that become even more relevant to those that live in Askala in this book. I think using the different coloured birds on the different books will make these books really cohesive as a series and stand out together on a book store shelf.

This book is centred on the children of the main characters that Burning was focused on. Though the now older characters that we met in Burning still feature fairly strongly in this book too. The genres I have seen listed for this book/series are Sci-Fi & Dystopian & Post Apocalyptic which I totally agree with but would add futuristic and climate-fiction to that list too.

Before the book plot reveals the proving, and those who will be serving as the new High Bound something else even more rare happens. Dex is sitting on the beach when he spots some sort of boat/raft on the ocean full of people, remnants, obviously trying to get across the ocean from the Outlands to Askala. As explained in the prequel should any remnant step foot on the land of Askala they automatically gain the right to stay there and are given food, shelter, medical care and anything else they should need. Basically, they are unquestionably accepted into the community.

The book is about the next generation and the fact they are approaching their proving, and also like in Burning the next generation of High Bounds are to be chosen again. This time there are nine teens that are sixteen so expected to be taking part in the proving to decide who will Bound to care for those not bound and the future of the earth and who will be Unbound and live a more carefree lifestyle and be cared for by those chosen as the Bound.  The sixteen-year olds proving will consist of four tests taken over seven consecutive days. The nine teenagers taking part this time are lovebirds Nova and Kian, Dex, Jay, Shiloh, Felicia, Thom, Fern and Wren. Though as it says in the blurb the four teens central to the plot are Nova, Kian, Dex and Wren. The first of the four tests seem really simple, yet the teenagers really start to over think what their best option is to approach and complete the task they are set.
The remaining three asks become more and more complicated and dangerous with one character dying in task three. Task four see’s one character run off alone giving up on completing the task at all and another seemingly double crossing both her own teammates and her competitors hoping to take the prize and credit all for herself.
Finally, all the tests are completed and each remaining teen has to have their chip fitted and a small operation if they are found to be Unbound. This “small operation” is something that was being considered at the very end of Burning. A resolution had to be found and put into practice to prevent anyone who is Unbound masquerading as a Bound.

The characters from Burning that were in Rising, that I still adored were Amity and Magnus who are happily married though older and wiser. It is clear that Magnus has had some difficult decisions to make to secure a future for Askala and earth. Some of these actions have been quite drastic, and not all have been supported by the whole of the High Bound council. Amity is continuing her mother Kiminas legacy looking after the pteropods and trying to increase their breeding capacity to secure a better diet and future for those that live in Askala. Despite the horrendous set back the pteropods breeding programme took in Burning. Life became quite difficult for both the Bound and Unbound when pteropods were in extremely short supply. In fact, the female Bound in Amity’s generation suffered the most with some having multiple miscarriages before their nutrition improved enough to support them and their pregnancies.
Of the older character’s featured I have to admit my opinion of Callix didn’t really improve, some of the tests he set were so dangerous and came across a little callous how they turned out. My opinion of Mercy changed and I felt quite sympathetic towards her and her child because of the fact Callix seems to have shut himself off in the lab over the years developing the proving tests, so didn’t spend much time with either if them. Though in this book he does apologise for being somewhat of an absentee parent/husband.

Of the teens taking part in the proving I quickly became attached to Nova who works in the medical wing. Though she struggles with the different levels of medical treatment on offer to Bounds and Unbounds. For example, equipment for stitches are in short supply so if a Bound has a cut they will be given stitches where an Unbound will merely be bandaged up. It doesn’t sit well with Nova who thinks medical treatment should be given equal to all.
Nova’s good friend is Kian, they are usually found together or on the way to the other. They both wish for a future together and know they want claim each other after the proving. Kian strives to do his best in everything and shows a special interest in the pteropods and their future breeding programs.
The character I absolutely adored was Dex, who was attacked as a child by a hooded Unbound. The attacker cut off his left hand, and obviously the proving carries extra stress for him. From being able to perform all the tasks as good as the other teenagers who have two hands to the whole inserting of his chip at the proving. The chip that differentiates you from being Unbound or Bound. The chip allows the individual to open the different doors to the areas on the Oasis where those in Askala live. The Unbound live in the higher levels of the Oasis, where as the Bounds live on the lower levels and are deemed worthy to have children. Dex has a great sense of humour and uses it often to put the other teens at ease during the tasks. Sadly, he feels inferior and thinks he is looked at as inferior because he has no left hand. He does feel extra stress asking questions as to where his chip will be placed as he has no left hand? If he is Bound where will he wear his ring, as everyone else wears it on their left hand? There is also the question of if he is Unbound how will the procedure to tell him apart form a Bound be completed, as that procedure also concerns the left hand.

The character I was unsure of, then grew to love, then wasn’t totally sure what to think about as the book went on, was Wren. Though overall, I have to admit to having a soft spot for her and looking forward to more from her. Wren has a different outlook compared to the majority of the other teens, and the adult Bound and Unbounds so I will be interested to read more about her and what changes she may end up in a position to have a say in. Will she attempt to change any of the laws or traditions. I am also highly anticipating the revealing of which of the new Bounds will become the new High Bounds and what jobs they will choose to undertake.

I totally love the world building, society, traditions, and way of life. It is so well thought out and really detailed. This book plot hooked me straight away and held me captive until the very end. I liked the element of trying to work out which new teen character belonged to which adult character previously featured in Burning. Obviously, the adult character parents and main character teens relationships are revealed as the book plot unfolds. I think there is so much more to come for both ages of characters as well as the potential for more Outlander characters to be introduced as well.

My immediate thoughts upon finishing Rising were Wow! Just what is the fallout going to be in the aftermath of the Proving? What did Callix mean by his comment to his son saying there were changes coming soon to Askala? What will happen when the war that has been mentioned as coming, arrives at Askala? Is the red-haired Phoenix related to who I think he is? I am seriously looking forward to reading more, wishing I had the next instalment in this series to start reading right now!

To sum up, this book, no, this series is highly addictive reading! And I can’t reveal what it was but what a cliff hanger!! I was (im)patiently waiting for this book after reading the prequel but, oh I am sooo eagerly, (im)patiently, enthusiastically, and excitedly awaiting the next book, which is called Breaking! So, I guess I will have to start counting down the days to the release of Breaking in February. If you love dystopian, futuristic, or climatic fiction you need to start reading this series now!