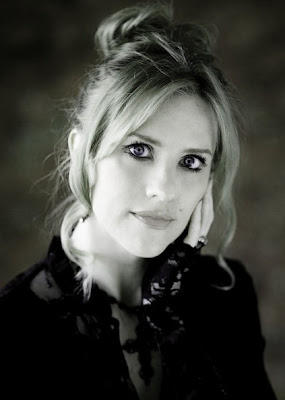 What is your name, where were you born and where do you live now?
Anita Grace Howard. Born in Chelsea, MA, and now I live in Texas.

Did you always want to be a writer? If not what did you want to be?
No. I used to dream of being a veterinarian until I realized there was blood involved. ;)

When did you first consider yourself as a "writer"?
The moment I finished writing my first book back in 2005.

Did it take a long time to get your first book published?
Yes. Seven long years and seven books later. I’m also on my second agent.

Do you work another job as well as your writing work?
I used to work in a middle school library, but now I’m a full time writer. And I LOVE it.

What is the name of your latest book, and if you had to summarise it in less than 20 words what would you say?
SPLINTERED. A spinoff of Alice in Wonderland, in which Alice Liddell’s granddaughter has to face the darker side of Wonderland’s whimsy.

Who is your publisher?
Abram’s Amulet imprint, best known for publishing the DIARY OF A WIMPY KID series.

How long does it usually take you to write a book, from the original idea to finishing writing it?
Usually about six months.

What can we expect from you in the future? ie More books of the same genre? Books of a different genre?
The book that won my second agent is a YA, and I plan to write that genre for a while. But I’ve written several adult fantasies and would like to get them out there. My goal is to have both an adult and YA audience that crosses over. I’ve always been drawn to fantasy/paranormal, but that is my one and only constant. Other than that, I like to spread my wings, and having books in both the YA and adult markets will allow me that freedom. And this time around, I have an incredible agent (Jenny Bent) who is rather eclectic herself, so the odds are in my favour. ;)

Do you have a favourite character from your books? and why are they your favourite?
Hmm. Morpheus from SPLINTERED, and Elias from TOMORROW’S SHADOW. I love the wounded anti-hero. They’re so flawed, and so real.

If you had to choose to be one of your characters in your book/books which would you be? and why?
Alyssa from SPLINTERED. Because she’s everything I’m not: brave in the face of insanity, morbidly artistic, and a fashion rebel. If you’d like to learn more about her, I did a post here a while back about why my MC is way cooler than me.

Do you have a certain routine you have for writing? ie You listen to music, sit in a certain chair?
I love to listen to playlists. In fact, I make new ones for each book. And my favourite place to write is in my office w/my computer and keyboard. Not a huge fan of notebook paper or laptops. There’s something about my fingers tapping on the traditional keyboard that lights my muse’s fuse.

Do you have anybody read your books and give you reviews before you officially release them? ie. Your partner, children, friends, reviewers you know?
My four crit partners and three other betas. So seven sets of eyeballs look at every MS before it goes anywhere.

Do you read all the reviews of your book/books?
I don’t plan to read all of them. Especially the Amazon ones. They can be vicious, and I’m very sensitive. I plan to have my beta readers and crit partners filter out the bad ones and send me the good ones. Yes, I’m a wimp.

Would you ever ask a reviewer to change their review if it was not all positive about your book/books?
No. Absolutely not. Everyone has a right to their opinion. Writing and reading are so very subjective. The querying process has taught me that. And what is it they say anyway? Any publicity is good publicity.

Do you choose a title first, or write the book then choose the title?
I usually write the first chapter or so, then a title comes to me.

How do you market/promote your books?
Twitter, blog interviews, FB, and my own personal blog.

What do you do to unwind and relax? Do you have a hobby?
Family, friends, rollerblading, mountain-biking, snow skiing, gardening, and vacations that at any given time might include an impromptu side trip to an 18th century graveyard or a condemned schoolhouse for photo ops.

Is there a certain Author that influenced you in writing?
The Bible very early on … I think I have Psalms to blame for my descriptive and poetic writing style. Heh; Charlotte Bronte, Ann Rice, Neil Gaiman, and Alice Hoffman are some of my favourite writers. Oh, and I would be remiss if I failed to mention Christina Rossetti's influence on my writing. She ignited my passion for imagery and sensory through the power of her beautiful and seductive prose. Goblin Market is one of my favourite poems of all time.

Is there a book you know you will never read? Or one you tried to read but just couldn't finish?
I don’t think there’s a book I’d ever say I wouldn’t read. But, I’ve had some trouble reading THE GLASS BOOKS OF THE DREAM EATERS. I just can’t seem to get into it. But I bought it and I’m determined to keep trying.

Are there any New Authors you are interested in for us to watch out for? and Why should we watch out for them?
I have a few friends for you to watch for; some are 2012 and 2013 debut authors who have walked the same path many of your readers are on now; others are already published but switching genres which is a big risk for a writer:

Thankyou for taking part in this Interview , I will be taking a look at the Authors you mentioned!