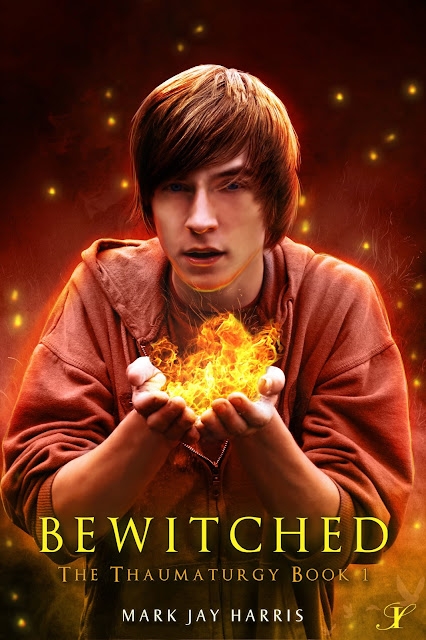 Is it love or is it witchcraft? He’ll never find out if he kills her first.

The first time Darren saw Samantha, she was floating above his high school gymnasium during a basketball game, invisible to everyone but him. Next time he sees her, she's sitting in front of him in class, wowing his friends and causing unexplainable things to happen that only he seems to notice. But things really get strange (and complicated) when his dying grandfather tells him that he is part of an ancient order, the “Pessum Ire,” whose duty is to destroy witches. What does he do now, since he’s almost positive Samantha is a witch…and he’s crushing on her pretty hard?
Release Date 1st March 2013

MY COVER COMMENTS
When I look at the cover I feel there is something missing from the top of the book. Like perhaps the authors name should be there instead of at the bottom with the book and series title. Or the Series title of The Thaumaturgy Book 1 could be placed at the top of the cover? It's just my initial reaction to the cover. I think the male on the cover looks a little like Merlin from the TV series, so unsure if that's a good thing or a bad thing. I am presuming from the cover that "fire magic" is featured within the book as it is on the cover?
Now for the blurb, I know I go on and on about this but I do love a good by line. I like the "Is it love or is it witchcraft? He'll never find out if he kills her first." It would certainly make me want to pick up the book to learn more. Especially as one of my 2013 Reading Challenges is to read more Witchy and Witchcraft books. Upon reading more of the blurb, I like the isdea of Samantha being a witch and Darren being a "Witch-Slayer", and the complication of romantic feelings for each other. Not sure about the order being called "Pessum Ire" I keep thinking of "Possum" instead of "Pessum", maybe it's just me.
So to sum up, would I pick the book up from a bookshelf? Yes but it would be more of a case of the byline pulling my attention than just the cover alone.