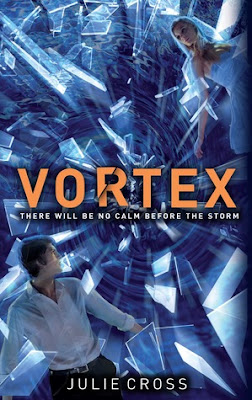 Here is Julie Cross' epic playlist and commentary for Bk#2 in The Tempest Series,Vortex. Julie had kindly added some notes to explain where each song would fit within the book. You can also click onto the post on MyKindaBook to listen to these songs and watch their music videos too.

Clocks by Coldplay - represents Jackson's constant doubt as to whether he's helping the right people or not, "Am I a part of the cure or part of the disease"
I also really like this song too and do see how it fits Jackson's mind of not knowing who to trust. ~Jeanz

Lovin' Touchin' Squeezin' by Journey - This is a literal choice for the playlist. It actually plays in a very important scene in Vortex but it's not actually mentioned by name, but you'll know when you get there.
I think I have heard a more upbeat version of this song. Upon listening I will probably be able to guess at the scene when I have finished reading Vortex. ~Jeanz

She's So Mean by Matchbox Twenty - you'll know exactly which Vortex character this song is dedicated to when you read the book. This was probably one of my favourite characters to write.
Aha! I think I know who is referred to in the books as "She's So Mean" in this song. I hadn't heard the song before but I had heard of Matchbox Twenty. ~Jeanz

Name by the Goo Goo Dolls - I can't say exactly why I picked this song but some of that is spoiler and some of it just speaks for it self.
Again I've heard of the Goo Goo Dolls but had not heard this song, and will more than likely understand its relevance and place in the playlist when I ave read more of Vortex. ~Jeanz

Everybody's Changing by Keane - this one has both a literal and a figurative meaning that you'll get when you read the book...and yes, I'm trying not to say that too much.
This is a song I absolutely love and always have from first hearing it. It had a meaning to me in what was going on in my life at the time it came out. I can totally hear that this would fit Jackson very poignantly. I love this song sooo much ~Jeanz

Cough Syrup by Young The Giant - this song is the very last song for Vortex. So, yeah, it represents the book's ending.
Sadly I hadn't heard of this song or band. Having listened to the song, I quite liked it, and can't wait to see how it represents the ending of Bk#2 Vortex.
Posted by Jeanz xx at 10:00