The eyes of the child on this book cover had my attention and made sure I had to know more, then reading the blurb I wanted to listen/read to this woman's side of the story of what had happened "behind closed doors" to her and her family. 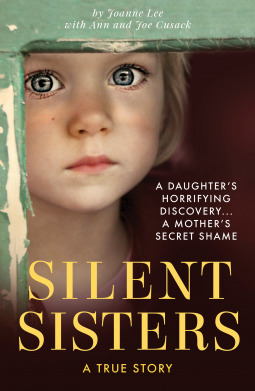 BLURB from Goodreads
A deadly secret.

For over 20 years, Joanne Lee's mother kept the remains of not one, but three newborn babies hidden in a bin in her wardrobe.

She had buried a fourth baby in newspaper and rags in St Helens Cemetery.

For the first time since exposing her mother's crimes, Joanne breaks her silence over her family's horrific ordeal and her fight for justice for the siblings she never knew.

Growing up in chaotic circumstances on Merseyside, Joanne suffered at the hands of a violent boyfriend and controlling relatives, as her mother lapsed into a downward spiral of drinking and casual sex following the break-up of her marriage. But the consequences of her mother's messy lifestyle turned out to be far worse than Joanne could ever have imagined.

She already knew about the baby buried in a shallow makeshift grave next to the family plot. But when Joanne came across a red plastic bin in her mother's wardrobe in 2009, she realised that the family home held an even more sinister secret.

In Silent Sisters, the daughter who was falsely accused of murdering her own baby sister will tell her full story for the first time, detailing her struggle to understand her mother, to piece together the truth and to give the four babies the proper burial they deserve.


As soon as I saw the cover of this book, I felt drawn to it. The tattered, battered looking door that the child is cautiously looking outwards. It is very striking the small blonde haired, blue eyed image of innocence. Seriously the eyes of the child on the front cover seemed to grab my attention and I just couldn’t flick by it. I then read the byline of “A Daughters Horrifying Discovery. . . . A Mothers Secret Shame” and was curious as to what a mother could feel shame about when her daughter found out. What on earth horrified the daughter.


Then reading the blurb I felt I had to, wanted to listen/read this woman's side of the story of what had happened "behind closed doors" to her and her family. The genre’s listed for this book are Biographies, Memoir and True Crime which I do agree with. Yet after finishing reading the book and finding out what happens to the “mother” in the book can it really be categorised as crime?

This book is an account of Joanne Lee’s life with her mother Bernadette.
Bernadette definitely doesn’t come across as mother of the year in the book, in fact far from it. It makes you wonder why this woman kept continually allowing herself to get pregnant over and over again. There would have been plenty of contraceptive options around for her. Or was it purely a case of what seems to be her favourite saying within the book, “Can’t be arsed”.

Everything seems okay at the beginning of this book, Joanne lives in a house with her mother Bernadette and her father Michael. Things weren’t great between her parents but the first time Joanne seems to really notice is when aged six, she receives separate presents from her parents and ends up receiving exactly the same gift from them both.
The first big change is when her mum announces they are going to visit Nanny Pat. Nanny Pat is a very stern, strict woman, who has everything in its place and a lace for everything. Everything also had to appear prim and proper. It’s at the visit that Joanne senses something “big” is about to happen or be revealed as she is actually allowed to go sit on the couch in Nanny Pat’s pristine front room, normally reserved for the Priest when he comes calling. It’s while she is sat literally on the edge of her seat that her mother Bernadette, states that she and her dad, Michael are getting divorced. Sadly, the most dreaded difference Joanne anticipates is living with Nanny Pat. Whilst living at Nanny Pat’s Joanne is ironically the best cared for throughout the whole of her childhood. Poor Joanne is bitten by Nanny Pat’s beloved dog and really needs hospital care, which as Nanny Pat and Bernadette work there you would think they would just dash there with her, but no. Going to the hospital would mean explaining what had happened people would be wanting to know How? Why? Where? Everything had happened. Nanny Pat wanted to retain her pristine image and the neighbours finding out Joanne had been bitten by the family dog would wreck that. So, Bernadette holds Joanne down whilst Nanny Pat stitches the wound!

Bernadette soon has a new house and bloke, Karl, to go with it. Things are quite good for Joanne as Karl buys groceries once a week and helps keep things tidy. But the small glimpses of a better family life never ever last and Joanne knows this in her heart. Joanne is left to fend for herself from a very young age, her mum has multiple boyfriends. She had to learn how to cook herself a meal, wash and iron her clothes as well as care for her younger siblings, Cath & Chris. Bernadette would rather drink, in fact when she wasn’t at work, she was sat at home drinking.
Joanne meets her own boyfriend Mark and becomes pregnant at a young age just like her mother did. Sadly, a happy little family is not to be for Joanne when her son dies. It soon becomes apparent that whilst leaving her mother behind and getting a home of her own, she has also saddled herself with a male version of her mother in Mark.

I could go on and on and into much more detail about this book, but I feel I would “spoil” the reading experience so will not say much more about the plot. The book goes on to tell about how a baby is found in Bernadette’s wardrobe, contained in a red bin.
After losing a child of her own, and holding that baby in her arms, Joanne takes it upon herself to bury this baby from the red bin at the family grave at the local cemetery. Which she calmly does in broad daylight and then Bernadette just never ever mentions it again. Only Joanne thinks of when/what the babies, milestones would be. Joanne can never forget what she has done and lives in fear of being found out, put in prison and having to leave her own children motherless. Despite being let down time and time again Joanne gives both her mother and her own partner Mark chance after chance It is Joanne’s younger sister whom Joanne has been like a mother to that tells Joanne of the appearance of the “red bucket” again. This time Joanne has had enough and she cannot stay quiet or risk attempting to bury the contents of the red bin. Joanne confides in childhood friend Julie and then Julie’s mum. It was Julie’s mum that would make sure Joanne had something to eat for breakfast and clothes to wear for school, so she trusts them both.

My final thoughts and words about the book and Joanne are they are both amazing, and yes as the byline says the story Joanne tells is horrifying and yet equally heart-breaking & heart-warming too.