REVIEW - AS SILVER IS TO THE MOON BY R.A. WATT 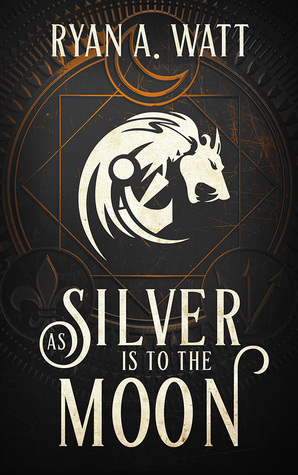 BLURB from Goodreads
New school. First love. A psychotic werewolf that wanted me dead. And it was only week one in Santa Isadora.For fifteen-year-old Teavan Laurent and his older sister Suzanne, Santa Isadora seemed like a sleepy and idyllic California town to finish high school after their unexpected move west from New York City.As he struggles to make friends in a town shrouded in secrets, Teavan soon finds himself the target of an irrational tormentor and rumored-to-be werewolf. The revenge-obsessed psycho vows to wipe out Teavan and his small family due to past wrongs beyond Teavan’s control or knowledge. The twisted legacy left to him by his late grandfather brings Teavan at odds with everything he knows to be true—or at least everything he thought to be true.The impossible truth of the tale begins to gain traction at his first wolf sighting, and Teavan and Suzanne soon find themselves in the crosshairs of the dark and secretive lycan world of Santa Isadora.

I was originally I was going to read a different book but there was something wrong with the mobi file. So I was scrolling through the kindle app on my tablet and chose this one to read. The cover is really quite different when compared to the usual shifter books have. I love the central part of the cover where you can see a wolf, a man, and then baby, or that’s kind of what I see. The byline reads “There are no alphas, no soul mates, only vengeance”. The byline suggests a very “eye for an eye” theme and it does fit part of the book well.

At the very beginning of the book there is a small section set in Calais, France in 1773 where two lycan’s are on a mission. It turns out someone has told Thibault that there is a traitor in their midst, so he and Sabine are hidden and waiting to pounce on the traitor. Thankfully Thibault has not been given the traitors name. Then this section ends and we are plunged straight into the present-day plot which is about Teavan, his father Mike, and his older sister Suzanne having moved out of the city and into the country. The reason for the move to Saint Isadora, California is because Teavan’s grandfather Hubert Laurent has recently died and left his son Mike his property. Mike’s initial reaction had been to sell the property, but, Hubert’s will specifies that the land cannot be sold yet etc etc. Obviously Teavan and Suzanne are not impressed with having to move to the “middle of nowhere” after living in a fast moving city.
The book also has a bullying theme within it. Bruno from the school Suzanne attends is used to getting his own way as he is big, tough and knows how to fight. He easily, beats everyone, and that’s if they even put up any type of fight against him. Soon Teavan, is the guy that Bruno wants to fight, not just because he is the new boy but because it turns out that the Laurent’s and Vincent’s have history that goes back a long time. Their history is revealed within the book, but, all I will say is it involves lycan history and it’s a fight to see which bloodline will survive.

I became really fond of Teavan fairly quickly, I wasn’t keen on the reason he was called Teavan, as I personally thought his sister being unable to say Steven would have worked better if his sister had been younger than him. I did adore the relationship Teavan and his older sister Suzanne had, they tended to not bother each much especially as they both go to different schools, which yes, I thought was a bit odd for such a small place to have two high schools. If perhaps it was in the next community/village along it may have made more sense to me. I totally get the Suzanne wants to do design and textiles and this certain school does that best etc. IT was just a little nitty pick thing.

The pace at the beginning of the book was too slow for my usual preference. My usual shifter reads seem to move more quickly than this one did, so yes, I was beginning to feel a little put off until around 47% when the pace picked up speed and I then felt more pulled into the book and desperate to know what would happen. I really liked the explanation of the use of silver bullets, “Gold is to the sun what Silver is to the moon”

This book would work as a standalone, or beginning to a series. If it is the start of the series, I hope we get more lycan’s, perhaps families coming to settle in the area? The series need more lycan characters. Also, the people that are in charge of keeping the supernatural lycan’s in line too. However, with only two known lycans left in Saint Isadora how will that work? The feel of the book and the high school being within some of the action reminded me a little of teenwolf.

Hmmm, So, it was sooo slooow for the first third of the book. Then you become more interested as you learn a little about the history of the different Lycan bloodlines. I would have liked a little more about Hub’s family and his lycan history. Then as you read on everything is building up to a climax where help in the lycan bloodline fight arrives from a previously unknown lycan, which I thought was really good. On the whole I did really enjoy the book.