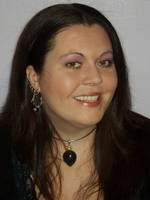 1. What is your name, where were you born and where do you live now?
My name is Caroline Barnard-Smith.  I was born just outside London but my parents moved us out to the beautiful Devon countryside when I was seven so that’s the place I’ve always called home.
My latest book is a dark fantasy about a hedonistic vampire called Jinn Nation.  Hmmm, a summary in less than twenty words, you say?  How about “A newly orphaned vampire meets a terrifyingly powerful woman in the desert and sets out on a murderous road trip.”
I am currently writing a new book but it will be very different to Jinn Nation.  I left Jinn Nation open for a sequel so I may return to it in the future, but I initially designed it to be a stand alone novel.  However, the vampire Dylan also appears in my debut novel, Dunraven Road.  He was a character who demanded his own story!
I’ve been writing and dreaming about getting published for most of my life, although I didn’t get really serious about it until I was at university where I wrote my first (firmly unpublished!) novel.  I think my mum initially inspired me to write.  She’s a fellow scribbler and avid reader so the house was always full of stories and books.
I’m actually really bad at coming up with both.  I let titles come to me organically while I’m writing because I rarely have a good one in place when I start, and even then I’m often unhappy with them.  As for covers, I’m hopeless with any sort of graphic design program and was so happy when my lovely cover designer offered to help me.  Jinn Nation’s cover was created by a good friend, using my ideas and images I’d sourced.  I think having so much input into the design of your own book cover is one of the most satisfying aspects of indie publishing.
Not so much with Jinn Nation, but my first novel, Dunraven Road, was heavily influenced by my surroundings.  It draws from the street and the building I live in, and much of the action takes place in the church I can see from my window.
A short while ago I would have argued there was nothing like the feel of a real paperback in your hands, but since getting my Kindle for Christmas last year I’ve changed my mind.  I think it’s the immediacy that’s hooked me.  Bookshops are closing left and right in the UK (particularly where I live) and it’s often difficult to find a particular book if you don’t want to order it from Amazon and wait for delivery.  With my Kindle, I can download the same books in seconds and even sample them first without getting funny looks from booksellers.
I think my favourite book is still The Lord of the Rings.  Some people argue that the characters are one-dimensional, but I’ve never had quite the same experience with any other book, that immersive feeling of actually being there.  I’ve always thought that Tolkien’s descriptions of various locations in Middle-earth were amazing.  When I first read about Lothlorien in particular it blew me away and I remember thinking that if I could write even 10% as well as that (I read the books at university), I’d be a very happy author.  I’m just starting to read them again, to my daughter.  She’s only four months old but it’s never too early to begin a healthy and lifelong appreciation for hobbits!
I think Peter Jackson did a phenomenal job with The Lord of the Rings.  Much of it looks and feels just the way I’d imagined it when I read the books, and that’s something I wasn’t expecting.  I’m really looking forward to seeing what he does with The Hobbit.  I’ve also always loved the movie version of Interview with the Vampire, which I think sometimes surpasses the novel.  Those are very rare instances though and most of the time, for me anyway, a movie comes nowhere near a novel.  One of the worst adaptations I’ve seen is Queen of the Damned.  While Interview with the Vampire was dark and lush, this supposed sequel turned The Vampire Chronicles into a shallow, disjointed music video.  It didn’t help matters that two 500-page novels had been ripped apart and condensed into one hour-and-a-half film.
I’m reading Cujo by Stephen King at the moment, for no other reason than a desire to return to Castle Rock :)  I’m really enjoying it so far, but I’ve seen that it has mixed reviews due to it not being a traditional King horror novel.  We’ll see how it goes.  And I’m reading it on my Kindle of course!
I remember feeling stupid at university because I just couldn’t derive any pleasure from modernist literature (I was studying English Literature).  I felt I ought to be appreciating and even loving Mrs. Dalloway or To the Lighthouse, but instead I hated every minute and got annoyed that there wasn’t the meat of a true story in there.  While I struggled through the requisite Virginia Woolf books, James Joyce, and Ulysses in particular, was a step too far for me.  I think I ended up selling that book on, in pristine, unread condition.
I’ve been told more than once that the female characters in Dunraven Road were a bit too weak and pathetic at times.  I thought including a centuries-old female vampire with a streak of lunacy and a healthy disregard for humanity would offset that, but even so when I came to write Jinn Nation I worked hard to make Christa, my other central character, far more ballsy.
Write what you love and write often.  Succinct but hopefully helpful!
I would definitely consider it if I ever wanted to write in a radically different genre, although the thought of having to build up an entirely new fan base and internet presence is a bit daunting!
Where can readers follow you? 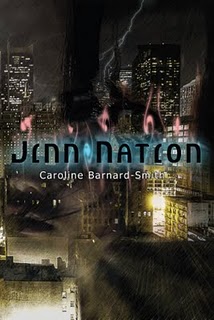 Once, Dylan, the vampire had feared nothing and no one. He had rampaged throughout the world on a seemingly never ending quest to fill his eternal years with the finest, most outrageous extravagances; with exquisite, soft-limbed young women and copious amounts of rich, vibrating blood. But life, however full of joy, inevitably changes.

Then he finds himself alone for the first time in his long unlife, and Dylan turns to the preternatural race of savage creatures called the jinn - a path that inevitably leads him to Christa, a strangely childlike woman with the power to control minds and read thoughts. Mutually intrigued by each other, they set out on a blood-soaked road trip that crosses the United States and the Atlantic Ocean, finally leading them beyond the world itself to the mysterious fae kingdoms of the Inbetween.


Would you like to win a copy of Jinn Nation? Well Caroline has kindly said she will give 2 readers a free ebook of Jinn Nation!
All you have to do is; Be a follower of the blog and make a comment below, the winners will be chosen using random.org on the 23rd of September.