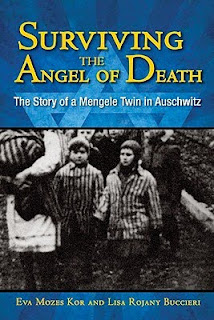 Eva Mozes Kor was only 10 years old when she first arrived in Auschwitz.Eva's parents and her two older sisters were taken to the gas chambers. Eva and her twin, Miriam, were herded into the care of the man known as the Angel of Death, Dr. Josef Mengele. Mengele's twins were granted the privileges of keeping their own clothes and hair, but it wasn't an easy life for them as they were also subjected to sadistic medical experiments and forced to fight daily for their own survival. Most of the twins died as a result of the terrible experiments or from the awful widely spread disease and hunger pervasive in the camp. In a narrative told with emotion and yet restraint, readers will learn of a young child's endurance and survival in the face of truly extraordinary evil. The book also includes an epilogue on Eva's recovery from this experience and her remarkable decision to publicly forgive the Nazis. Through her museum and her lectures, she has dedicated her life to giving testimony on the Holocaust, providing a message of hope for people who have suffered, and working toward goals of forgiveness, peace, and the elimination of hatred and prejudice in the world.
I don't know how to explain why I am choosing to reading this book, only to say that I believe that the horrors of the Holocaust should never be forgotten, that it was something that truly happened and that our children do not seem to be taught the reality or existence of the Holocaust anymore. The younger generation of teachers seem to brush it off as if it either didn't happen or was not as bad as it seemed which is a ridiculous and uneducated view. These atrocities happened and should never ever be forgotten by any generation. Eva tells her heartbreaking story in a rather matter of fact way, she never seems to feel sorry for herself, she is ,by nature, the strongest of the twins both mentally and physically, she is the one that fights to stay alive and keep her twin Miriam alive too. They are torn from their previously rather quiet and normal, quite privileged life in the country, where their clothes are handmade for them and they have plentiful supplies of food and are quite sheltered from the horrors of the world and thrust into a world of survival of the fittest, eat whatever is available, take clothes from the dead to keep yourself warm, and take one day at a time. The twins are considered the "lucky" ones at the camp as they are alive and have each other, they have to come to terms with the fact the rest of their family is probably dead. The two girls have their arms stamped with prisoner numbers they no longer use names, they know only each others names.They have to learn to survive and rely only upon each other, they are only separated once when Eva has been injected with an illness and has to be taken to the infirmary. Anyone taken to the infirmary usually dies, and that means death for their twin too, as Doctor Mengele only wants twins to experiment on. Eva and Miriams lives literally depend upon each others survival. By some miracle Eva survives the illness Mengele injected into her and is returned to her sister whom she hardly recognises, Miriam had thought Eva dead and had literally given up on life herself, so Eva has to again be the strong twin and fight to save their lives. Eva has to learn to "organise" extra food. The extra food helps them both fight the diseases that are rife around them and the injections that they are being given too. you would think all their worries would be over when the camp is liberated, but even when the camp is liberated the hardships aren't over, food is still scarce. The twins are moved to a holding camp, where after a bit of persuasion an old family friend signs for them and returns them "home". "Home" has been ransacked, their parents are not there, that is when Eva finally faces up to the fact that her family is dead. Eventually Eva and Miriam make their way to Palestine to their uncle.The repercussion's of the Doctors experiment come to the fore once again when Miriams kidneys fail, her kidneys fail as Doctor Mengele gave her an injection at the age of ten to stop her kidneys growing to a size of an adults. Eva once again saves Miriams life by donating one of hers. This book covers an horrific time in history, a time that should never be forgotten, did the world learn from the atrocities that occurred, not really as war and segregation still seem to be occurring in todays so called modern world. I could seriously go on and on about this book, about the people who turned a blind eye when Eva's family were taken from their village, there is so much covered in the book. the cover must send a chill down your spine as i know it does mine, then you learn the truth behind how that photograph was obtained......
I have had the privilege of exchanging emails with this courageous lady and would like to add another comment that we have discussed, I wish to say that Eva Kor  is not victim but  a victorious survivor who has healed herself by forgiving the Nazis and all people who have hurt her.
This book is due out on 15th October and personally I think it should be used in schools to educate our children as to what really happened in our history. Available amazon.com, Amazon.co.uk
Posted by Jeanz xx at 12:53