THE IRON KNIGHT BY JULIE KAGAWA 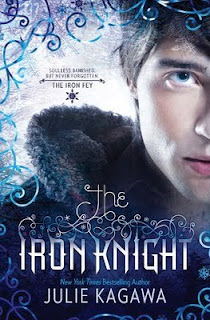 Ash, the former prince of the Winter Court has given up everything. His title of Prince, his home at the winter Court, even his vow of loyalty. And for what? All for a girl…a half human girl named Meghan Chase and it may all be for nothing. That is unless he can earn a soul and become human.
Ash as an emotionless and cold faery Prince always saw love as a terrible weakness for only fools and mortals. His own "one true love" Ariella had died such a horrific death that it killed the gentler feelings that Ash had once had forever. Or he thought those alien feelings had gone forever until he set eyes on Meghan Chase. Meghan is half-human and as Oberon King of Summer's daughter she is also half fey. Meghan had smashed down the icy barricades that Ash had put up and he fell  uncontrollably in love with her and binding him to her for all time. Ash swore an oath to be her Knight, but when all of Faery almost fell to the rule of the Iron Fey and then Meghan became the Iron Queen, she severed their bond to save his life. As no Summer or Winter Fey can survive in the Iron realm. So Ash begins a quest to obtain a soul to enable him to be at Meghans side in the Iron Realm for all of time. Accompanying him on his quest is Puck - the Summer Court prankster and good friend of Meghans and of course Ash if only they would admit to being friends! Also on the journey is Grimalkin the cat sith. Others also join him on the journey but to reveal them now would in my opinion spoil your enjoyment and surprises in the book, so I will try to keep spoilers out and be more generalised.
To survive in the Iron Realm Ash needs to have a soul of his own and a mortal body. He faces impossible tasks to try to earn them. No one has ever returned from these tasks to tell the tale.
Ash eventually learns a truth that turns reality upside down and challenges his deepest, darkest beliefs. Ash learns that sometimes it takes more than just courage to make the ultimate sacrifice.
I had seriously high expectations for this book and yes some of them were met but the book also disappointed me in places too. The actual journey to the end of the wood/world seemed to drag in places as though it was being drawn out to make the book longer. Sorry and no disrespect to Julie Kagawa but that is how it felt to me and I always pride myself on giving my honest opinion in my reviews. Having said that I did still enjoy the book overall. I loved where Ash saw possible futures for himself and Megan, and saw them married and having a son etc. I loved the characters of Ash, and Puck and the others on the journey to the testing grounds. The friendships and "fake" animosity between certain characters was brilliantly written. I thought the actual tests that Ash went through were really well thought out and an excellent concept, showing him what he stood to lose if he chose to become a mortal.


This book is due out on 25th October and will be available at Amazon.com,
Amazon.co.uk and Bookdepository.co.uk is £4.55 to preorder.