Guest Review by Ena; SAND AND WATER BY SHAE O'CONNOR 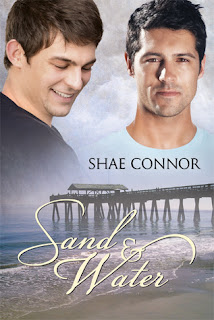 John McConnell is a widower and is getting along fine raising his daughter on Georgia's Tybee Island, though he wouldn't exactly say he's happy.John is haunted by the memory of his dead wife, he hasn't even considered dating again. All that changes when he meets Bryan Simmons in the park. It doesn't take long before John realizes that what he feels for Bryan could be something real. But how will John know when he's ready to move on?

Bryan carries his own heavy emotional baggage but with John's help, Bryan starts to put his demons to rest. Together John and Bryan lay the foundations for a relationship. It looks like they might finally leave their tragedies behind them that is until John takes a misstep that could turn a magical night together into their last.
This book has a really interesting storyline concept. I loved how the relationship between John and his daughter was portrayed it was really believable and heartwarming. I also liked the individual characters of John and Bryan and how they got together in a loving relationship. I wouldn't read it again even though I did enjoy the book as I found, in my opinion that the sexual aspect of the relationship was pushed to the fore too much and dwelled on too much. In short there were too many sex scenes in it for my liking. All that said I would recommend the book to the right sort of age group for the adult content contained in the book. A well written readable book!
Available from Amazon.com, Amazon.co.uk £16.99 paperback or £4.98 on kindle
Posted by Jeanz xx at 13:32