YOU ARE MY ONLY BY BETH KEPHART 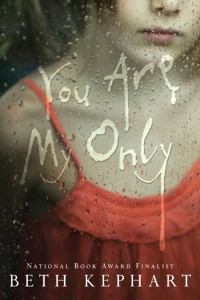 Emmy Rane was married at nineteen and a mother by the time she was twenty. Emmy became trapped in her marriage, in a life with a husband that she no longer loves. Her Baby is her one and only joy.  One sunny day in September, Emmy takes those few fateful steps away from her baby to collect a blanket from the house for herself to sit on under the swing that Baby lies in. When she returns she finds Baby missing. Emmy immediately panics the one she loves the most is missing! The only thing that is left behind is one lonely yellow sock.
Sophie is fourteen, but she has never been to school. Sophie is homeschooled by her mother. Sophie has been manipulated by her mother into being a reclusive teenager. Sophie is forced to move frequently and abruptly from place to place. Sophie and her mother are perpetually running from what her mother calls the “No Good.” Sophie is becoming more and more curious about the outside world she never sees. Sophie is curious about her neighbours too and the freedom the boy that lives there seems to have to go to school and play outside. So one afternoon, Sophie breaks her mother's strict rules. Sophie ventures out, and meets Joey and his two aunts. Sophie see's this loving family and it opens her eyes, giving her the courage to look into her past. What she discovers changes her world forever…
This book is the riveting story of Emmy and Sophie, their alternating narratives of loss, imprisonment, and freedom regained. Their stories escalate with breathless suspense toward an unforgettable and dramatic climax.
I initially found this book to be a difficult read, then I really got drawn into the stories of these two female characters. Emmy who had Baby stolen, has a breakdown and is committed to a hospital and then mental ward, where she lives longing for her Baby to be returned to her.
Then there’s Sophie who at first blindly obeys her mother to stay hidden and exist only in their little world. Then she starts to watch her neighbours and eventually plucks up the courage to speak to the boy next door. She quickly becomes friends with him and his aunts, all the time keeping her new friends a secret from her mother. It’s the speaking she does with her new friends that sparks her curiosity so she begins searching the boxes that her and her mother drag from place to place but never unpack, that is when she discovers the secret of her past.
I really cannot say much more without giving spoilers of this book, but i will say though you may find it a rather difficult and in places slow read , stick with it as it is worth it at the end when all the pieces of the puzzle fall into place. So I would say that yes I would recommend this book!