ALL THE BROKEN PIECES BY CINDI MADSEN 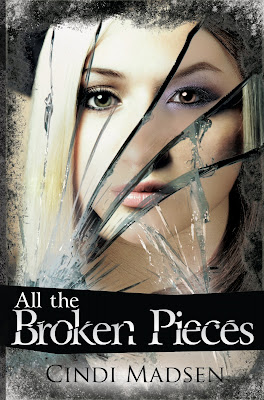 What if your life wasn’t your own?

Liv comes out of a coma with no memory of her past and two distinct, warring voices inside her head. Nothing, not even her reflection, seems familiar. As she stumbles through her junior year, the voices get louder, insisting she please the popular group while simultaneously despising them. But when Liv starts hanging around with Spencer, whose own mysterious past also has him on the fringe, life feels complete for the first time in, well, as long as she can remember.

Liv knows the details of the car accident that put her in the coma, but as the voices invade her dreams, and her dreams start feeling like memories, she and Spencer seek out answers. Yet the deeper they dig, the less things make sense. Can Liv rebuild the pieces of her broken past, when it means questioning not just who she is, but what she is?

MY REVIEW
I received an e-arc of this book directly from Entangled Teen (thankyou) in exchange for my honest review and this post is also part of the official blog tour.
So, I have already done a "My thoughts on the cover" post, which is still relevant but has anything changed now I have actually read the book? Prior to reading the book, I admit the cover did make me want to read the book, and I must add that the book does not disappoint at all! The Broken Pieces on the cover, do actually represent the main character Liv. At first I thought of the girl being schizophrenic but is that the case, or is it something totally different and perhaps much much darker.
The main character Liv, or rather Olivia at the beginning of the book. Liv is the nickname the first friendly girl at the new school she is attending gives her. Keira is so bubbly and friendly that Liv readily accepts the nickname and feels more relaxed at her first day at school. Everything feels new and strange to Liv as she has recently recovered from a car accident and woken from a coma. Liv keeps hearing warring voices in her head, one is good and the other is quite a nasty one.
Liv is intrigued by one of the guys at the school his name is Spencer and he was once part of the "in" crowd but now hardly speaks to anyone at all.
This book is really well written, it flows so well and keeps you interested the whole way through. You want to put all the broken pieces together and solve the mystery of Olivia. what was she like before her accident, why can she not truly remember things. What are the flashbacks about? Who is Elizabeth, the little girl from Liv's dreams?
We also want to "fix" Spencer, know why he shuts himself away from everyone else.
Then there's the whole fitting in hassle at school. Sabrina is the "queen" of the "popular's" and she seems to have taken an instant dislike to Liv. Should Liv conform to Sabrina's "popular rules"? Then Liv has all the mystery going on at home, why don't her parents speak to her about the past? Why don't they answer her questions and whats in the locked box in the office drawer?
I really loved the book, it had me totally hooked. I admit to having an inkling as to the mystery surrounding Liv, but there were still twists and turns and the odd red herring to make you second guess if you were right or wrong.
So did I enjoy the book? Loved it! Would I recommend it? Definitely Would I read a bk #2 if there is one? There could be a second bk I suppose but then most things were wrapped up at the end of this one. Would I read more by Cindi Madsen? I would certainly look out for more books by her yes.