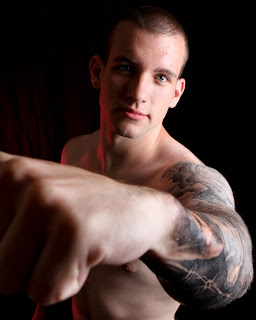 What is your name, where were you born and where do you live now?
My name is Dan Andrews, I was born in the western suburbs of Chicago and I now live in Dekalb, IL since I am also a full time student attending Northern Illinois University.

Did you always want to be a writer? If not what did you want to be?
Growing up I never intended to be a writer. At first when I was very young I wanted to be a police officer, but as I got older I really fell in love with coaching people and exercise science, so I began wanting to open up my own gym, which still might happen, but presently I am 100% focused on becoming a successful author.

When did you first consider yourself as a "writer"?
I personally don't consider myself a writer. For me, there is a distinct difference between a writer and an author. In my opinion, anyone who consistently writers anything they consider valuable is a writer, even though no one may read them except the person who wrote them. An author, on the other hand, writes things and has taken the steps to publish them for the entire world to see. To me they are two very different levels of commitment.

Do you work another job as well as your writing work?
I am also a full time student, though; I should probably get a part-time job soon as well, haha.

Who is your publisher? or do you self publish?
I decided to self publish after starting my own publishing company. I spoke to a great deal of other authors when trying to figure out which route to take, and for me self-publishing made the most sense.

How long does it usually take you to write a book, from the original idea to finishing writing it?
My first book took roughly six months to write. And then five months to edit. My upcoming book, Yeseterday’s Scars, was written over the course of years.
Which of your books were easier/harder to write than the others? Yesterday’s Scars has been a very gradual writing process, it happened naturally over time. Sons of Suicide on the other hand took a great deal of concerted effort and I put a lot of pressure on myself to get it out on time and to the quality that I require.

What can we expect from you in the future?  ie More books of the same genre? Books of a different genre?
My next book is a wild one, I am having trouble classy-ing it, it could be called poetry, philosophy, or fiction. I would say over the long term I have a few more non-fiction books in me, and eventually I will take the plunge into fictional stories.

How long have you been writing?, and who or what inspired you to write?
I have been writing seriously for the past five years or so, my favorite class that I took in high school titled American Studies is really what piqued my interest in great writers and pieces of literature, and from there I took the plunge.

Do you have anybody read your books and give you reviews before you officially release them?ie. Your partner, children, friends, reviewers you know?
For Sons of Suicide I let my best friends and roommate read it before anyone else. I did this to get some really honesty feedback and to make sure they approved. I figured if my best friends did not like it, than no one else would (since they should be biased.)

Do you gift books to readers to do reviews?
I do, I ran a promotion on Facebook for that exact thing!

Do you read all the reviews of your book/books?
Absolutely. I seriously consider meaningful criticism.

What was the toughest/best review you have ever had?
I have been a bit spoiled; I have yet to hear a truly negative review of Sons of Suicide. There are some parts of it that people disagree with, but on the whole everyone I have talked to has enjoyed it.

Would you ever ask a reviewer to change their review if it was not all positive about your book/books?
No, I think that would be disrespectful to the reviewer. As long as they do not have some freakish vendetta against the author they should be free to say whatever they like.

How do you come up with the Title and Cover Designs for your book/books?Who designed the Cover of your books?
One of my best friends and his brother, Alex Laniosz (the graphic designer for the book), came up with the idea for the cover. They are amazing with super artsy visual things; I am just good with words.

Do you choose a title first, or write the book then choose the title?
I usually begin writing and eventually the title will slap me in the face.
How do you market/promote your books? Contacting reviewers, radio interviews, Facebook ads… Really it all comes down to word of mouth and getting the book into people’s hands so you can let your book speak for itself.

What do you think makes a book a really good/bestseller ?
Promotion and marketability, how many copies you sell has very little to do with how good the book is.

What do you do to unwind and relax?Do you have a hobby?
I love video games, I play them far too much. Gaming is my go-to activity for relaxing.

Are there any hidden messages or morals contained in your books? (Morals as in like Aesops Fables type of "The moral of this story is..")
I would say there is a great deal of moral lessons laced throughout my books, they tend to be more implicit than explicit though.

Is there a certain Author that influenced you in writing?
Ernest Hemingway. Hands down the greatest writer of all time, in my opinion of course. I am on my way to reading everything that he has written.

Which format of book do you prefer, ebook,hardback, or paperback?
I really do love them all. I love e-books because of how portable they are, but occasionally I get sick of looking at a screen and then hard copies are nice as well.

What are you currently reading? Are you enjoying it? What format is it?(ebook, hardback or paperback)
The Complete Short Stories of Ernest Hemingway, it is an ebook. I am blown away by the quality of his short stories compared to his novels.

Do you think ebooks will ever totally replace printed books?
I think they will come close. Print books will always exist in my opinion, but I think E-books will dominate the landscape soon enough.

Is there a book you know you will never read? Or one you tried to read but just couldn't finish?
Game of Thrones, I cannot stand George R.R. Martin’s writing style. I know a lot of people love him, and he is good at what he does. But I disapprove of his style.

What piece of advice would you give to a new writer?
Start making thoughtful actions and mistakes now. No one ever wrote a successful book without publishing one.

Do you or would you ever use a pen name?
I would consider it; it is a funny thing to think about.

If you could invite three favourite writers to dinner, who would you invite and enjoy chatting with?
Ernest Hemingway, Napoleon Hill, and Les Brown.