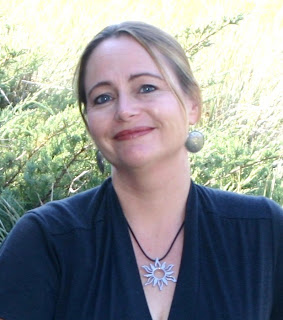 When did you first consider yourself as a "writer"?
Learning to call myself a writer has been a process. I’ve always been a writer, but I didn’t tell anyone. Then I told a few trusted friends, family, etc. When my book was accepted by Passion in Print Press I started to tell a few people, but it took a while to embrace that I was a writer. I think I’m finally there because the other day when filling out a form at the optometrists I actually wrote ‘author’ in the blank for “profession”.

Did it take a long time to get your first book published?
Well yes, because it’s still not published! I have my actual first completed novel out on submission. Little Red Riding Wolf was actually a novella I wrote for a contest in 2010, just for fun. I wanted to see if I could actually write “hot”. And I guess I can because in 2011 it was a finalist and received an Honorable Mention in Passionate Ink’s  Stroke of Midnight contest.

What is the name of your book, and if you had to summarize it in less than 20 words what would you say?
My book is titled Little Red Riding Wolf, from Passion in Print Press. It’s a spicy twisted fairy tale, and here’s the tagline:
What if Little Red Riding Hood was a werewolf and a sexy forest ranger wandered into her woods?

How long does it usually take you to write a book, from the original idea to finishing writing it?
It varies. I’m getting faster at the actual writing, but the editing slows me down. The original idea might sit in a file for a long time, gathering other ideas and maybe some starter scenes before I begin the outline. I’m new to outlining and find that even though I used to dread it, it speeds up my writing process and is becoming more fun as I go. Outlining can take anywhere from a week to a month. It depends on how long the book is and how many ideas I have in my folder. Little Red Riding Wolf started out as a shorter novella, just twenty-thousand words, so it only took a few days to outline, two weeks to write, and another one to edit. But I have put it through the re-writing process twice and added another fourteen thousand words, so how long did it take? I’m not sure at this point.

Which of your books were easier/harder to write than the others?
Snow and the Seventh Wolf(coming out on February 4th, 2013), the sequel to Little Red Riding Wolf has been the most difficult. Not because of the book itself, but because life just kept interfering. I sat down to write it last January just as my mom went into the hospital and my editor started the edit process for Little Red Riding Wolf. Needless to say I put Snow aside. I continued to pick it up and put it down until it was finally finished in May, but when you look at the few weeks it took to write the first book and the five months it took to write the second, you can see it was excruciating. Luckily life has settled down, my mom is fine, and I’m getting the third book in the series, Goldi and the Bear finished in record time!

What can we expect from you in the future?  ie More books of the same genre? Books of a different genre?
I love twisting fairy tales so in addition to the three novellas in this series I have a longer twisted fairy tale series that I am working on getting out there. It’s definitely longer and more in depth simply because it is comprised of three full length novels. I’m hoping to have a firm publishing date sometime this spring. In addition to that series I’m working on a series of shape-shifter paranormal suspense, without the fairy tales. I enjoyed writing about the werewolves so much that I wanted to explore slightly darker plot twists and turns, so look for that series sometime in 2014.

Do you have plans for a new book? Is this book part of a series?
In Little Red Riding Wolf, Red falls in love with a human forest ranger, Evan Brwester, but Evan’s presence in pack territory has her alpha werewolf brother angry enough to kill. After editing Red’s story, my editor at Passion in Print asked if Seth (Red’s brother) would get his comeuppance. So I wrote Snow and the Seventh Wolf, where Seth changes from angry anti-hero to romance hero as he finds himself falling in love with someone he never thought possible, a human.

What made you decide to write that genre of book?
I’ve read twisted fairy tales for years in many forms from sci-fi twists to the current adaptations of YA and romance. There’s something amazing about a plot that can take you from childhood to adult-hood and everywhere in between. Maybe it’s the romance of the happy ever after, maybe it’s the transitions and transformations the characters have to go through, but when I thought of what I wanted to write, fairy tales came first. Of course I had to spice them up and add an adult twist!

Do you gift books to readers to do reviews?
I’d love more reviews and I’m giving away copies all the time. If you are interested in a free copy not only am I giving away copies with this blog tour, but you can follow my blog http://jessicaaspen.com and see when I give away another copy. I’m also considering starting a Street Team later this year, so keep an eye out for the announcement. I plan lots of giveaways, not just books, for the Street Team.

Do you choose a title first, or write the book then choose the title?
In this case I chose a title first. The original contest Little Red Riding Wolf was written for was entitled Red Hot Fairy Tales. And I just couldn’t get Red out of my mind, so I had the title first. For Seth and Snow’s story, I knew I wanted to twist another fairy tale and since Red has a color name, I chose Snow White to twist. The title took a bit longer, but I knew it would relate to both  wolves and the original fairy tale. The thirds story in the trilogy is Goldi and the Bear. This one for sure the story came first. I’d decided on another color heroine to round out the series, and Goldilocks made sense, but in that one Goldi is the wolf and she’s involved with a were-bear, so the title needed a little work. All three of these books will eventually be in an anthology and my editor came up with that title, Twisted Tales: Come Into the Woods.

Have you ever suffered from a "writer's block"? What did you do to get past the "block"?
No, I find when I’m having trouble writing it’s because the scene is difficult. I don’t know where it’s going or how to get there. That’s not writer’s block, that’s procrastination due to a difficult job. It’s like putting off cleaning under the sink, just because it’s not fun. Writing isn’t always fun, there are days when I don’t want to move a scene, because once I do I have to go through the entire book and fix all the other threads that tie into that scene. But I have to do the work. And ultimately the book is better for it. Of course I can always go do one of the more fun jobs and put off the harder work. But just like what lurks under the sink, those tough jobs are always there. I love writing enough to do the dirty jobs, that’s the real secret to writer’s block.

What do you do to unwind and relax? Do you have a hobby?
I love to walk and hike. I wish I got out into the mountains more often. I live close enough to go frequently, but I find the more that I write the more I’m jealous of the time I have to spend away from the computer. I’ve tried beading, knitting, and cross stitch, but I need to get up and move since I sit so much and my eyes need a rest. But not my brain! I find that I come up with some great plot ideas when walking, it’s like the brain can work unfettered when the feet are moving.

Do you think children at schools these days are encouraged enough to read? and/or do Imaginative writing?
My kids have been encouraged to both read and write at school. My girls are voracious readers and they love to write too. But as an educator I can tell you that one of the strongest indicators that a child will become a reader is if a parent reads. And not just to the child, but on their own so the kids perceive reading as an adult activity. Parents underestimate how valuable they are as role models. Books and magazines at home, how much are the parents read by themselves, as well as to the kids- it all makes a difference. Children want to do what adults do. My mother read. I read. My kids read. By reading books by yourself and letting your kids see you read you are teaching them that reading is valuable. So pick up a book just for yourself!

What do you think about book trailers?
I think book trailers are great and I feature them on my blog all the time. I’m currently working with Lex Valentine, who did the cover for Snow and the Seventh Wolf, on a book trailer. I can’t wait to see how it comes out because I love her work!

What piece of advice would you give to a new writer?
Write. Write more. Write as much as you can. Then get feedback. Take classes. Write some more. Apply what you’ve learned, get more feedback, then fix your manuscript. When you feel it’s ready start sending it out and see what others say. And write some more!

Where can readers follow you?
You can find me blogging twice a week at http://jessicaaspen.com
I’m also on twitter @jessicaaspen, on Facebook.com/Jessica.Aspen, and Goodreads.

Thank you for taking the time to do the Interview for my blog! I have signed up to follow your blog via e-mail, and am definitely interested in reading some of your books soon in the future! I have
Posted by Jeanz xx at 12:00