REVIEW - THE HERD BY EMILY EDWARDS 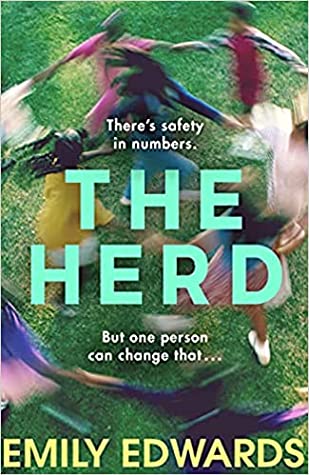 BLURB from Goodreads
You should never judge how someone chooses to raise their child.

Elizabeth and Bryony are polar opposites but their unexpected friendship has always worked. They're the best of friends, and godmothers to each other's daughters - because they trust that the safety of their children is both of their top priority.

But what if their choice could harm your own child?

Little do they know that they differ radically over one very important issue. And when Bryony, afraid of being judged, tells what is supposed to be a harmless white lie before a child's birthday party, the consequences are more catastrophic than either of them could ever have imagined . . .

REVIEW
The cover of the book could quite easily be a photograph taken at a child’s party or even a photo of a scene in a park, garden or school. Being totally honest, it wasn’t the cover that attracted me to the book, in fact it put me off slightly because of the blurred aspect of it, which I find triggers my Menieres disease. The title piqued my curiosity, I wanted to know what herd was being referred to. Then I read the blurb and in light of the whole covid situation with people talking about whether to have the vaccine or not, I thought this would be an interesting read. I also liked the byline of "There's safety in numbers. But one person can change that . . ."

Before the actual book starts there is a prologue which reveals how the author came up with the idea for the book. Emily researched vaccinations, discovering various stories such as a ninety-two-year-old who clearly remembers the night her sister died from Polio. A father whose one-year-old stopped interacting, and making eye contact just a couple of weeks after having had the MMR. Emily heard many stories, learning every pro and con, but the main thing in common everyone had who she spoke to had, was that they wanted to “do the right thing”

The main female characters are Elizabeth Chamberlain and Bryony Kohlis, who live on the same street opposite each other. They are what some people would call unlikely best friends, with the super organised, a place for everything and everything in its place, smartly dressed Elizabeth, and the more carefree, go with the flow somewhat casually dressed Bryony. but are almost like family to each other really. Elizabeth’s family consists of her husband, Jack, their two sons Max & Charlie and their youngest child six-year-old Clemmie. Bryony’s family comprises of her husband, Ash, his two sons, Theo & Bran from his previous marriage to Linette, and their youngest child four-year-old Alba. The two women are so close they are godmothers to each other’s daughters. In fact, Clemmie is like a big sister to little Alba, so much so they are looking forward to Alba starting Nettlestone School, the same school Clemmie attends. Though the two women are close and see each other daily they do have totally different parenting styles. Bryony is a more go with the flow, let the kids have an ice cream treat, and is the one most likely to turn up late to school to collect her child. Where as Elizabeth, is a more rigid, strict time keeper. The two women have come to a point that they may be best friends but how they each raise their children is something they do not discuss or interfere with. The two women have extremely different views on children’s vaccinations. As Clemmie had fits as a child, Elizabeth consulted with a Dr and discovered that having the MMR may cause her ill effects. Bryony’s view is coloured by her mother, Sara’s strong opposing view to the MMR and the awful effects she believes it had on her son Matty. Prior to the vaccination, Matty had been a “normal” healthy child. However, within days he became non responsive and Sara faced a choice a mother should never have to make. Sara was told either Matty went into a care facility or her two daughters Bryony and Jessie would be removed from their home. Naturally, Bryony has a fear of something similar happening to any children she may have.

Elizabeth is in super-mum mode organising Clemmie’s birthday party. Elizabeth sends out a rather formal email invitation that requires the recipient to confirm that their child has had all their vaccinations, due to the risk it would put Clemmie at, they are requested to stay away from the party if not.

The problem that causes a rift between the two friends occurs when there is an outbreak of measles which coincides with the school breaking up and affecting a lot of those that attended Clemmie’s birthday party. When it becomes clear that both Bryony and Alba have the measles, Elizabeth jumps to the conclusion that it is them that have given the virus to her daughter Clemmie. Elizabeth is furious that despite every precaution she has taken her daughter has been exposed to and caught measles. It especially hurts her that though Bryony never confirmed Alba was vaccinated, despite clearly knowing Clemmie was not vaccinated both Bryony and Alba continued to have close contact with Clemmie. Clemmie ends up being rushed to the hospital, and Elizabeth’s worst fear happens, the virus causes Clemmie to have brain swelling and results in her losing her sight. As Clemmie and her family adapt to their new way of life, it is the end of the friendship between the two families.

I don’t want to go into too much more detail, the book does jump from present – being the courtroom, to the past – the events leading up to the court case. I really enjoyed reading the book and felt it was quite a fast read for me. I loved the analogy of Bryony and Elizabeth being “not exactly chalk and cheese . . . more like cheese and pineapple. Both women obviously think they are right in their own actions, however at the same time they both feel guilty at different times in the book. I think the other major thing about this book is that it really does make you think. It makes you ask yourself which mother you are/would be.

My immediate thoughts upon finishing the book were that I could identify with both sides of the argument as well as having an opposing view and/or questions too. This book really is a conversation starter, and it would make a great book club selection.

Summing it I found The Herd to be an emotional, believable read that seems even more relevant with the continual debates going on about the covid vaccinations and boosters. The book covers how some would call a relatively simple decision, or in one couples case in the book indecision can become life changing for their daughter & family as well as their best family friends & the wider community that live surrounding the two couples and their young families.