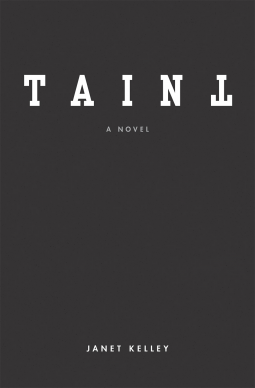 BLURB from Goodreads
Rebecca White, a senior at the top of her class at Plains High School in 2001, is a Kansas girl going places…until the rape. She wants the rapist to pay for his crime and go to jail. Unfortunately, nothing is that simple, and she wasn’t the one raped.

This is the story of how Rebecca seeks revenge for her best friend, Luke Warren, who was raped by the principal’s son, Weston. While the senior class chooses corsages and boutonnières for prom, Rebecca plots revenge against Weston. She must find a way to make him pay without revealing Luke’s secret. The solution she finds is chilling.

Set in a small town in the American Midwest when the terrorist attacks in New York City brought life to a standstill, Taint by Janet Kelley portrays how friendship and justice are tested when the unthinkable happens.

REVIEW
I’ll be totally honest I thought the plain black cover wasn’t doing this book any favours but when you think about it, it does attract your eye as its so different to other books on a shelf. The title was the thing that intrigued me, I wanted to know what/who was Tainted and how and why too.

The book basically tells the story of Luke’s rape at the hands of a couple of the “popular boys”. I thought the book would be centred on Luke’s horror and the act of rape but we only learn about the circumstances of the rape when he finally confides in his best friend Rebecca. The book then goes on to tell the story of how something awful happening to her best friend changes Rebecca. How though Luke, Rebecca and Tiffany are all friends, it is Rebecca that Luke confides his deepest, darkest secret, which she promises to keep and not repeat/tell anyone. Rebecca of course promises, what could this dark secret be? It's only when she is told she realises how hard it is going to be to keep her word. She not only wants revenge, she is determined to get it, even if she has to pretend to like the rapist and lure him into attacking her to have it.

We see how the relationship between Rebecca and Luke changes, she views him as “the victim”. Both Rebecca & Luke’s relationship with their other friend Tiffany, as neither of them loop her into the big secret. Tiffany would literally spill the “secret” to anyone and everyone. In fact, at one point in the book, Tiffany is talking about the usual high school stuff and Rebecca snaps at her telling her “Not everything is about you!” We see how Rebecca initially struggles with the fact a boy has raped her best friend, Luke. At first Rebecca thinks it is more straight forward when a boy rapes a girl. The girl can report it and hopefully the boy is punished. Luke has already decided that he isn’t going to report the rape when he tells Rebecca about it. During the incident that led to the rape, Luke had been drinking with his attacker, and had in his words “just frozen up.” He believes if he reports the rape everyone will believe he is gay, as his attacker had called him “gay” during the attack. The attacker is one of the most popular boys in school, so Luke thinks everyone would take his side against Luke and he just couldn’t cope with everyone knowing.

The book is told in a fairly chatty, kind of Bridget Jones Diary style, through the voice of Becca. It wasn’t what I expected, I thought I would be reading Luke’s voice. The book handles some seriously difficult subjects, homosexuality, rape, peer pressure, bullying etc, quite well. It also has the usual “school” themes running through it, the “in” gang, the graduation party planning etc.

My immediate thoughts upon finishing the book were that it’s a kind of sad tale really because the “secret” ends up coming between Rebecca and Luke.

Summing up, I thought the book was okay. It handled difficult subjects well but it felt a bit slow in places and just felt a little flat.