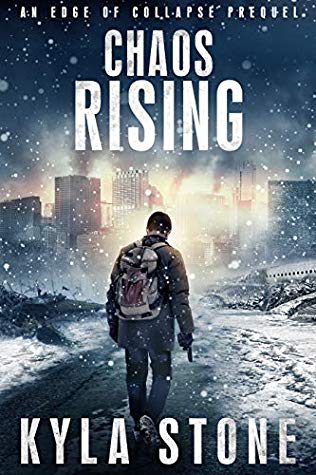 BLURB from Goodreads
In a heartbeat, everything grinds to a halt...On Christmas Eve, the lights go out. Vehicles stop working. Communications break down.Reclusive former soldier Liam Coleman doesn't want to be anywhere near bustling downtown Chicago the day before Christmas. But his twin brother and his pregnant sister-in-law need him, so he makes the trip.But mere minutes after leaving O'Hare, their car crashes, along with hundreds of other vehicles. When Liam's phone stops working, he begins to suspect something more sinister than a local power outage. But before he can react, the first plane falls from the sky...

I am always searching for new authors to try and after reading a brilliant post apocalyptic book, I was in the mood to read more of the genre but the next book wasn’t out for a while. I have joined some groups on Facebook so turned to those, checking out what had just come out, what people were talking about and I saw the cover for Chaos Rising which instantly made me want to know more. I needed to know who the lonely looking figure on the cover was, why were they alone, where were they going, etc etc. The cover certainly did its job of capturing my attention.

I do love reading a series from the very beginnings as it is being released so it was a great time to start reading this series.

The book’s central character is Liam Coleman who had served with Special Forces, until being discharged due to a back injury. Now he lives alone, on his own homestead, in which he is quite self-sufficient and prepared for anything. Liam is certainly out of his comfort zone in an airport surrounded by bustling crowds on Christmas Eve. If it had been up to him, he would have taken a quieter route and drove in his own vehicle, but there wasn’t time, he hadn’t seen his brother, Lincoln, for four years and he needed him, now. Liam is very fond of his brother Lincoln and his pregnant wife Jessa. In fact, he had seen Jessa first but his more outgoing brother had been the first to speak to her and the rest was history.
Lincoln and Jessa finally arrive in their car to collect and one look at his twin brother tells Liam that Lincoln is struggling. Lincoln has also served in the army, he returned home with a prosthetic limb and PTSD from that same IED explosion take the life of his best friend. Lincoln has visibly lost weight and looks drawn and tired. Liam manages a few words with his 9 months pregnant sister-in-law, Jessa as they stow his bag away in the car boot. Though 9 months pregnant, Jessa is, calm and as capable as ever. Jessa reveals that Lincoln hardly sleeps and even worse had an outburst at work meaning he has now been laid off. Jessa tells Liam he is the only one who can talk to Lincoln, to get through to him and help him.
On the car journey, they just generally chat about the baby and him not having a name yet as Lincoln has said he will know the baby’s name when he sees him.
Suddenly, all the cars seem to lose control at the same time, ploughing into each other causing more and more accidents and injured people. Something strange has happened, the traffic lights are all out, people trying to use their mobiles to call for help are discovering they are not working at all either. Then to make matters even worse planes start flying lower and lower in the sky attempting to do emergency landings wherever they can. Liam is faced with an impossible decision when both Lincoln and Jessa need his help….who should he help, who needs him the most…..what would Lincoln want him to do….then something just seems to kick into gear and the decision is made.

I won’t reveal any more of the plot, but what I will say is that this book is action packed and quite fast paced too.

I soon became attached to Liam who is prepared to go out of his usual comfort zone in an attempt to help his twin brother Lincoln who is struggling with his PTSD. I was also fond of Jessa who despite being pregnant and in need of medical attention, finds it difficult to ignore her medical training passing casualties as Liam attempts to get them to safety. Another smaller character I really admired was Prisha, she ignores a colleague’s attempts to stop Liam and Jessa seeking refuge in the Hotel they are working in. Prisha doesn’t hesitate she goes to their aid immediately and finds anything they may need.

My immediate thoughts upon finishing this prequel were Wow! A quick read, read it all in just one reading session. It is certainly action packed, and so much happens in this prequel. This book sets the scene for the possible horrors to come. I easily took to and adored, Liam, Lincoln, and Jessa. I definitely want to read more of this series......especially if it's all as great as this prequel!
To sum up I really loved this book, I read the whole thing in just one reading session and I am looking forward to more from Liam but, also hoping for more from the new character we meet near the ending of the prequel along with Jessa’s parents maybe. This prequel is certainly a fantastic start to a potentially amazing series. Sometimes when you finish a book you think about what is to come in the rest of the series but this one, well it could go in so many different directions. I am just looking forward to discovering more.