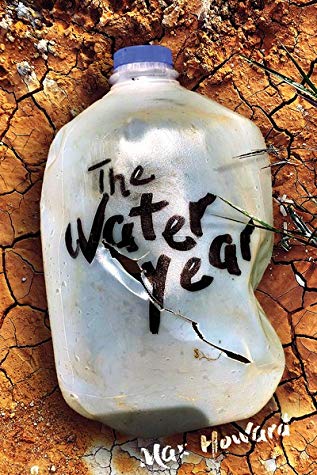 BLURB from Goodreads
Sophie lives on the border between the United States and Mexico. She spends most of her time taking care of her little sister and working at the family restaurant, hoping to catch the eye of Ruben, the Mexican boy who delivers baked goods. Her father and uncle spend their free time scouring the desert as part of a civilian militia, hoping to stop undocumented immigrants from entering the United States. When Sophie becomes involved with an immigrant-aid organization called Water Is Life, it challenges everything she's ever known. Suddenly, Sophie is stuck at the borderline of family and justice.

I have read quite a few of these Hi-Lo, prose/poetry style books now and I am being totally honest I would have kind of wrinkled my nose up at reading poetry/prose but these books have really changed my mind!

The cover is simple and effective as it features a large water container that has a large significance in the story. When I saw this book and read the blurb, I felt compelled to read it and share my thoughts on it.

The main character of the book is Sophie who is still grieving the loss of her mother. Sophie carries a lot of weight and responsibility on her young shoulders as she is expected to fit into the role of the “woman of the house” when at home, fixing something to eat for her younger sister Violet and keeping the house neat and tidy too. Sophie also helps out a lot at the family restaurant, which is called Fresh Ranch whilst keeping an eye on Violet at the same time. Sophie has been in and out of the restaurant from being very young so when her dad gets worried about Violet being there it irritates Sophie a little. Sophie is a bit fed up at not seeing enough of her best friend Amy lately. Amy has a boyfriend called Lucas who thinks he is cool, but Sophie finds him annoying and sarcastic. Lucas constantly clicks his tongue ring and Sophie finds it infuriating. Sophie doesn’t have a boyfriend though she does have a crush on the Mexican delivery boy that brings Fresh Ranch its baked goods and pastries whose name is Ruben Velez. Amy coerces and cajoles Sophie into going to the Sato twins party, they are having in the desert area. It’s whilst at this part that Sophie makes a shocking discovery. That makes her wonder exactly what her dad and Uncle Matt do in the Desert Rangers camp outs. Sophie thought it gave her dad an outside of work activity, distract from thinking of her mom so much maybe and at the moment it probably takes Uncle Matt’s mind off his divorce from Aunt Rachel.
After discovering the plight of immigrants and their long trek across the desert without water, Sophie decides she wants to help and that’s how she ends up meeting Ruben Velez and getting to know more about him. Ruben is part of human kind, an organisation that regularly goes out into the desert and leaves large water containers for the thirsty. However, the problem is as quickly as human kind are putting out these water containers someone is slashing them in an attempt to discourage the immigrants. Amy decides they should do a school play about the plight of the immigrants and ropes in Sophie to help.

I adored the character of Sophie, in one way she is so grown up, helping in the family business, taking care of her younger sister but in other ways she is still so young and naïve. Though perhaps her father fails to see it Sophie is also still missing her mother dearly and writes letters to her which form part of this book.

I thought the water droplets as the Chapter separators was really different yet very relevant to the book’s content. I enjoyed the letters Sophie wrote to her mother and the “signs” she saw as replies from her mother were poignant and realistic. I also liked the nod to current children’s films with the reference to “Ice Fairies” and the way Sophie and Amy watch it with Violet so much that they know the words and sing them which totally confuses Amy’s boyfriend Lucas who has no idea about the song “Here I Am”, the words or where it is from. I loved the sweet naïve first crush, and first dates scenario between Ruben and Sophie.

I think the book was very well written and covers a few serious subjects such as, death of a parent, friends getting boyfriend, first boyfriends and of course the main element of immigration. The style of the book makes it easy to read, there are no super long words, or complicated explanations to put off a newer reader or perhaps a more reluctant reader off in any way, yet the plot remains interesting all the way through and can be enjoyed by more experienced readers too. I honestly think anything that encourages more people to read is a fantastic idea. For me, I usually read these in just one of two reading sessions, so these are perfect for me to read in bed before I go to sleep or to curl up on the sofa with a cup of decaffeinated, dairy free coffee with!

My immediate thoughts upon finishing this book were that I really enjoyed this story of two teenagers that have a secret crush on each other. a girl mourning her mother whilst trying to step up and being the "woman of the household" helping to care for her younger sister who realises her father is part of something she doesn't morally agree with. Will she go against his wishes? Will he accept her opinion and meet her part way?

To sum up this is an amazing story told in a brilliant way!