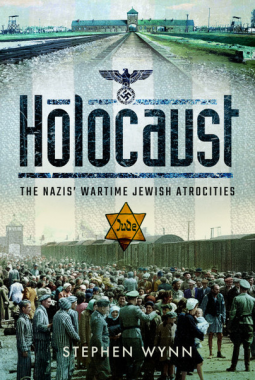 BLURB from Goodreads
The Holocaust is without doubt one of the most abhorrent and despicable events not only of the Second World War, but of the twentieth century. What makes it even more staggering is that it was not perpetrated by just one individual, but by thousands of men and women who had become part of the Nazi ideology and belief that Jews were responsible for all of their woes.This book looks at the build up to the Second World War, from the time of Hitler's appointment as Chancellor of Germany in January 1933, as the Nazi Party rose to power in a country that was still struggling to recover politically, socially and financially from the aftermath of the First World War, whilst at the same time, through the enactment of a number of laws, making life extremely difficult for German Jews. Some saw the dangers ahead for Jews in Germany and did their best to get out, some managed to do so, but millions more did not.The book then moves on to look at a wartime Nazi Germany and how the dislike of the Jews had gone from painting the star of David on shop windows, to their mass murder in the thousands of concentration camps that were scattered throughout Germany. As well as the camps, it looks at some of those who were culpable for the atrocities that were carried out in the name of Nazism. Not all those who were murdered lost their lives in concentration camps. Some were killed in massacres, some in ghettos and some by the feared and hated Einsatzgruppen.

It’s going to be difficult to review this book as how can a book that covers such an awful era in history be “good” and how do I explain why I wanted to read it without it offending anyone? Well I am going to try my best, first of all, World War 2 is an era I have always felt drawn to learn about that I find interesting. I totally agree that the Holocaust was a horrific time in history, but I am of the opinion it should never be forgotten. This is the sort of history that should be taught in school. I don’t want to go down a political route with my review but I believe this era and what happened should never be forgotten. After the coverage of the Holocaust Memorial Day I have learnt there are some people that seem to believe the Holocaust either didn’t happen or was over exaggerated! I don’t understand how they can suggest it didn’t happen when there are survivors that were there that went through and saw atrocities happening around them.

I guess I should get back to this specific book before I go on rambling. The cover is striking and depicts the content of the book. The symbol of the Nazis army and swastika feature on the book along with many prisoners in uniforms and what looks like new arrivals to a camp in their travelling clothes or Sunday best as they thought they were heading to a new life and wanted to impress those they would be working with. I think the cover is all the more powerful when you have read the book and the scene on the cover retold many times within the book. The information in this book is historical and factual. It has been collected from official data.

I’ll be totally truthful I have watched many films based on true stories but I have also read real survivors stories such as Eva Korr’s Surviving The Angel Of Death, where she tells what happened to herself, her sister and others around her that were selected for experiments being carried out by Dr Mengele. I also recently watched the documentaries about the different concentration camps and the Windermere children. I have also read even more fictional stories and fictionalised stories that are based on the true events. So, I guess the point I am trying to make is that I would have said that I knew quite a lot about this era. That I knew about certain people of the time such as Hitler, Dr Mengele, Eva Braun, as well as those with notorious nicknames the “the beast of” “the bitch of” etc.

I won’t lie, at times particularly at the beginning of the book I found it quite hard going, and did occasionally wonder what and why I had committed myself to reading this book of horrors. Then I thought about those survivors that had been there and seen all this happening in person, who carried it all around with them in their heads and hearts every day of their lives. I continued reading as these people deserve to be heard, their stories must be told and read. I almost feel I owe it to those who died to read and learn about what happened to them.

The book cover how Hitler rolled out his beliefs that the Jewish race were a problem. Though I must add that Roma people, the ill and disabled were also sent to concentration camps and into gas chambers. Hitler managed to encourage, coerce, (whatever you want to call it), thousands of men, women and young people that the a certain section of the community, the Jewish race were responsible for everything that was wrong in Germany and the world. The book explains how the Nazi party rose in strength and power in a country that was still in the process of recovering from a previous war. Some Jewish people saw the unrest and worse coming and managed to flee the country. But though some fled many more could not flee or did not flee.

The book explains how the Nazis began by painting the star of David on their shop windows, it covers the night of glass, when shops and synagogues were smashed up and/or set on fire. There’s the ghetto’s that came first before eventually been sent onto one of the many concentration camps.

This book has taught me a lot, though I may not remember or perhaps subconsciously prefer not to remember the exact statistics of those that died in gas chambers, were shot in front of mass graves or worked to the point they dropped dead. I would say I have learnt a lot more than I already knew. I honestly didn’t realise there were so many concentrations camps.

My immediate thoughts upon finishing the book were that the book dealt with a very difficult subject presented with fact, figures & statistics about a horrendous time in history.

To sum up, to say I “enjoyed” reading the book seems odd and wrong but it is a very captivating, shocking, informative, educational and yes in places heart breaking book. It is a book that enables to easily create imagery in your mind of the vile acts committed and I will say I think this is a book that will stay with me for a very long time. I went through a whole range of emotions whilst reading, from sympathy with those being persecuted, to anger at those in charge of the atrocities, to tears at all the lives lost. I think this book would be a good tool for schools to use. I also think it would be a great aid to any one writing a fictional book about the era.