REVIEW - BREAKING - AFTER THE THAW BY TAMAR SLOAN & HEIDI CATHERINE 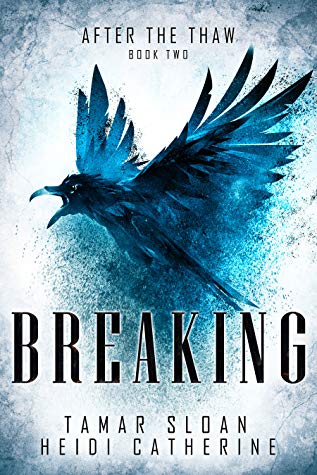 BLURB from Goodreads
Only the chosen shall breed.

Four teens must face the fallout of the Proving. Three have made it through. One has not.

Four lives defined by the outcome. Four lives who thought the Proving was the most difficult test they would ever have to face.

They all assumed Askala was safe, but a link to the Outlands has been established and a Remnant invasion is now a threat. In a starving, damaged world, Askala has what others want.

Except the fight for survival is far more complicated than right or wrong, or us and them. It's about humanity versus Earth.

As bonds are fractured and new connections are forged, the question becomes - how do you fight for your world, but also your heart?

I found myself really eager to read Breaking the second full length book in the After The Thaw Series. I honestly, really love the covers of this book series. The birds that became more relevant to those that live in Askala in Rising, and in this book the birds are Ravens that carry messages to and from Wren. I think using the different coloured birds on the different books will make these books really cohesive as a series and stand out together on a book store shelf.

Breaking starts up right where Rising left off with poor Nova being in complete shock at the result of her Proving. Lots of thoughts are going through her mind, she is literally stunned in stillness, not believing what has just happened. I have to say I felt immediately hooked into this book just on my curiosity of Nova’s reaction to her own Proving. It has so many questions whizzing through my head! And we haven’t even found out about who the new High Bound council will be. A lot of people are in for a shock as a lot of people had sort of taken the Proving test results for granted.

Once everyone has revealed whether they are Bound or not, the next thing on the agenda is the choosing of the High Bound. It is announced that this year things will be slightly different as not that many people scored high enough on the tests to be eligible to become High Bound. As a consequence of this there will only be 7 High Bounds to form the council, meaning some of the members will have to take on two jobs/responsibilities rather than just the usual one. Shiloh volunteers for the infirmary job that was Nova’s dream and it is given to her. It will be Nova’s mother Thea that trains and works with Shiloh until she can fully take over. The meeting goes on and the other jobs are given out.

This review is so difficult to write without giving too much away. So much happens in this book to the characters as well as the sanctuary that is Askala. There’s a couple of totally unexpected pregnancies where the future mothers are Unbound! There’s relationship angst for Nova when she see’s Shiloh cosying up to Kian, the man she should have been building a future and a family with. Dex doesn’t know what to make of the relationship between Wren and new arrival Phoenix who seems to flirt with any female around him young, old, Bound, or Unbound. Callix had warned his son Dex change was coming, though I’m not sure he expected it to arrive in the form of more outsiders. This book left me with so many questions about Callix and the tests he set for the proving. Then there is the question of did he meddle with anything, such as the test results or the implants given to female unbounds…I guess we may find out in the next book.

Askala has a lot to deal with in this book, just as they seem to find one solution another problem crops up. Askala just seems to be recovering from it’s losses during the testing for the Provings when more “remnants” arrive via the ocean during a storm. Nova’s duty to Askala kicks in immediately and she raises the alarm to let the people know what is happening. When it looks like they will all drown Nova helps her friend Wren to rescue them and bring them safely ashore. Now new leader Kian has to decide what will be done with them. Magnus the former leader is also putting more pressure on his son to do the right thing, to protect those on the Oasis at Askala. Kian has many difficult decisions ahead of him.

I felt real sympathy for Nova who is trying to get her head round what she see’s as her own drop in status. The fact Shiloh begins to cling to Kian does not go unnoticed though it does upset Nova even more. Naturally Nova mourns the future that she no longer has. I am really looking forward to what the consequences of the secret tryst between Kian and Nova mean for the pair of them. Kian seems to be torn between his heart and love for Nova and his love and duty to Askala. No one has found out about their secret meeting and its results yet, though it won’t take long for Dex, who did see them meeting to guess what’s happened. When Nova thinks she is alone in her dilemma, it turns out another newly Unbound, Felicia is in a similar position. Felicia and her partner are plotting to run away to the Outlands to make a life for themselves there instead.

I felt sorry for Dex too who becomes increasingly confused about the relationship between Wren and new arrival of Phoenix. Phoenix and Wren are obviously close however Phoenix flirts with all the women he meets old, young, Bound or Unbound. When Phoenix’s heritage is revealed Dex will be in for an even bigger shock. When, how or even if it is revealed because it seems that a war may be on it’s way! Messages are being sent between Wren and her father. Wren wants her father to hold off a while but she receives a message that he will be arriving during the next big storm and looking at the sky a storm is looming right away!

We learn more about the life of the Unbound in this book and what they think of their position in society along with how they are treat, or rather not treat when it comes to injuries. Once again, the book is told from the different points of view of Wren, Nova, Kian and Dex. You get to see what they think about what is happening around them. Theirs Kian’s view and how he is expected to put his duty to Askala above all else even the love of his life. Then their Nova and her drop in status, revealing how her life has drastically changed. We discover some of the Bound and Ex-High Bound are willing to bend the rules a little for their own family. Dex has to deal with his feelings for Wren, as he see’s first hand how she interacts with newcomer Phoenix, who is in some ways the total opposite of the Askala people with their values and rules. We see Wren, still outgoing, brave, not afraid to stand for what she sees as right, being torn between doing the job she came to Askala to do, which could be described as spying and intelligence gathering and her new found loyalty to Dex and the few friends she has made who eagerly accepted her into their lives in Askala.

I truly adored the "irony" elements featured in the series so far, once again there is forbidden love between a Bound and Unbound. We have not one but two Unbound women becoming pregnant. I am absolutely loving the intricacies of the plot, it has been so well thought out and planned. The little hints at what is to come, the clues along the way revealing answers to questions that you ask later in the book. The mysteries solved along the way. I enjoy learning about the differences and similarities of traditions and ways of living of both the Askalan and Outlander people. I also really liked the two versions of the story of how and why Ronan was cast out of Askala. I haven't yet got to a point with this series where I think I know all about the world either the Askalan's or Outlander's are living in. I'm still curious to know more. Little things link some of the Outlander's having bird like names such as Wren and Phoenix....could Cy be a play on the word Cygnet? I'm looking forward to discovering more.

My immediate thoughts upon finishing reading this book were Wow! I had an inkling about some of the revelations in this book, but didn’t see some of the other coming at all. Brilliantly thought out details and clues as to what is yet to come.Wow! Just wow! Amazing! I am honestly seriously looking forward to Falling, yet at the same time not wanting the series to come to an end!

To sum up I love, love, love this series! From the characters to the plot I honestly enjoy reading it all. The detailing and descriptions are amazing and make the scenes easily envisioned. Definitely looking forward to reading more, I don’t want it all to end!