REVIEW - PROTECTING HER - THE DOCKERY SHIFTERS BY ELLEN LANE 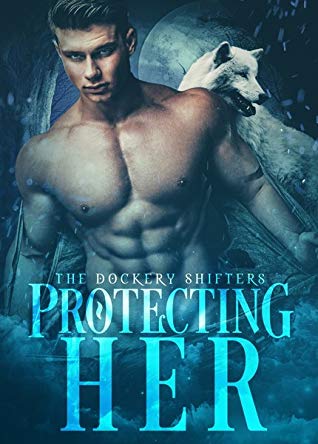 BLURB from Goodreads
A war is brewing in Dockery.Despite the fact that Shifters and humans have lived without conflict in the Adirondacks for fifty years, trouble is on the horizon.An Alpha struggles to retain control of his pack while a rival clan fears for their future - and in Dockery itself, the population is torn between welcoming Shifters into their fold and banning them completely.With the future of both wolves and humans in the balance, how will either race weather the coming storm?

REVIEW
I fancied reading some shifter fiction and as my usual go to authors didn’t have anything out of pending. I had to have a search for some new authors. I enjoy reading a novella if it’s a new author to get a feel of whether I will like the author and series. So, I chose to read this novella along with another shifter novella by another “new to me” author. The cover uses a rather hunky male to represent one of the shifters in the novella, as well as featuring a light coloured, wolf and moon in the background.

The book begins with a clan meet up between the Belleview pack and the nearby Dozier pack. Solomon is the Belleview Alpha and is accompanied by his hot-headed brother Hunter and burly pack members Derek and Gregory. The Alpha of Dozier pack is Raymond, he is joined at the meet with his arrogant, antagonistic brother Ephraim, his second Titus.


It soon becomes apparent that Ephraim wants a fight and Hunter is all too willing to give him one. So much so the two Alpha’s discuss just the two of them attending the meeting to avoid the potential conflict. For the most part the shifters keep to themselves, though they are known about by the “human”, “non-paranormal people” but they still tend to keep themselves to their own kind. The only exception to the rule is Duke Dozier who lives amongst the non-paranormal people in Dozier. If there are any disagreements Duke tries to be a mediator or peacemaker.

Two non-paranormal characters that feature in this novella are Georgia and her sister. Georgia had left Dozier to go to college and nursing school but had felt an extraordinary pull to return, even though her awful ex-husband Vincent still lives there. Georgia is in the centre of Dockery one day indulging her ill sister Everly when they are informed there’s a meeting at the Town Hall that they should attend. Though Georgia would prefer to keep herself to herself, it is Everly that coerces her to attend the meeting, seeing as they are already in Dockery.

The rather mysterious, attention commanding, Duke Dozier speaks at the meeting, explaining he doesn’t want people to be afraid of shifters, he wants them to feel safe. He goes on saying people have become used to him. Then points out he has helped Marla’s daughter find her way home when she became lost in the fields. He also helped Gus out when his pub became super busy due to some lost tourist buses. Duke is trying to get the communities to mix, and have more trust around each other. Duke certainly gets the women at the meetings attention with his gorgeous green eyes.

Characters I loved and want to know more about are of course the gorgeous green-eyed Duke Dozier. Hot-headed Hunter who I can imagine locking horns with Ephraim, both of them causing problems for their respective Alpha’s Solomon and Raymond. I’m also curious as to who might be the perfect mate to tame Ephraim!

I did really get pulled into this novella and it has served as a great introduction to Dockery, it’s residents along with the Belleview and Dozier packs too. I am looking forward to reading more about these shifters and non-paranormal neighbours, can they all peacefully co-exist?

To sum up I really loved it but soooo many questions, it ends just about as the action is going to start and literally kick off!
The main question being, When can I read more????