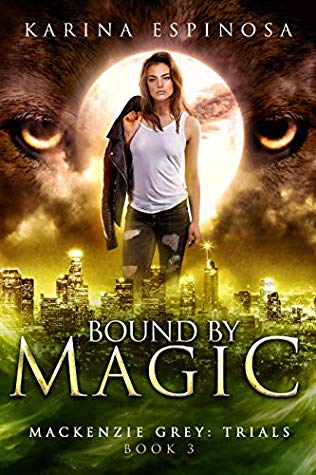 BLURB from Goodreads
All debts must be paid.

Mackenzie Grey has had it rough these past couple of months. She’s lost her job, her relationship with Sebastian is teetering on the edge, and she’s hiding from a particular warlock that’s ready to call in his favor.

When Bobby Wu catches up with Kenzie, it’s not what she expects. He said he would own her, and he meant it quite literally. Bound to the warlock, it’s a race against the clock to untie herself from Bobby before she does something she’ll live to regret.

Will Mackenzie find a way out or will her world come crashing down around her?

REVIEW
It’s no secret that I love Mackenzie Grey and adored the other two books in this series so I knew as soon as this one was available, I absolutely had to read it! When you first glance at the cover you don’t notice all the details, its when you look at again that you see everything, and there’s lots to see on this cover! This cover has Mackenzie Grey front and centre with the eye drawn to her dressed in her trademark outfit of jeans, t-shirt and jacket slung over her shoulder. This cover goes with the rest in this series and yet still co-ordinates well with the previous Origins series too. I love the shifter eyes on the cover too, they really draw the readers eyes to cover well. There is also the moon prominently placed centrally on the cover behind Mackenzie as the full moon is still extremely important to her even though she is no longer moon-bound anymore. I also really like the addition of the skyline at the bottom of the book. Genre’s I have seen listed for this book include Urban Fantasy, Fantasy, Paranormal, Romance and Supernatural. There’s certainly a lot of different supernatural species in this series, with even more possibilities introduced in this book.

As a reader I was worried for Mackenzie when she had to “make a deal with the devil” in the form of Bobby Wu in the last book. The way he ominously said he owned her now sent shivers down my spine and had me anxiously biting my lip wondering what he had in store for her. There was one thing for sure it would be something big and more than likely both illegal and something Mackenzie didn’t really want to be part of. As the first words of the blurb say “All debts must be paid” and wow does Mackenzie have to pay! After Bobby Wu pop’s in on Kenzie and uses darl magic to brand his hand print on her shoulder she finds herself quite literally at his beck and call. No matter where she is, who she is with or what she is doing she is strongly compelled to leave it and quickly make her way to the man who thinks he is her master now. It soon becomes clear Mackenzie is to be the one to dirty her hands and paws so Bobby Wu can stand by and watch the dirt fly. From previous books we know Bobby Wu has a different sense of right & wrong or black & white than everyone else. Bobby Wu seems to continually loiter in the very dark, dark grey zone and he is determined to use Mackenzie and her wolf to his advantage as much and as often as he wishes.

Along with all this Mackenzie is trying to keep her relationship with Bash on track. Bash had rushed ahead and bought them a home that they could fill with a family. A family that Mackenzie does not feel ready for, she isn’t ready to feel tied down or responsible for anyone else right now, but will Bash dig in his heels on wanting children? Or can Mackenzie bring herself to discuss their future, rather than running from it as she usually does? There’s a brilliantly poignant and emotional scene in the book where Bash tells Kenz whether their family of two or more as long as they are together it is fine by him.

There is a bit of a turnaround between two very important people in Mackenzie’s life. Bash and Mackenzie do come to a decision about no longer keeping secrets from each other which is a huge step in the right direction. However, now best friend Amy is all human and in Kenzie’s mind “breakable” she decides to keep any danger she is in hidden from Amy for as long as is possible. One relationship going from strength to strength is the romance between Amy & Jackson, it’s clear to everyone around them they are in completely in love.

Mackenzie’s brother Ollie is suddenly released from the army and decides he wants to hang around with his sister more, which could become yet another hassle on Mackenzie’s ever increasing list of problems as he doesn’t know about the supernatural world and she is unsure how he will react to knowing what/who she really is.

This book is absolutely packed with action along with favourite characters and new characters being introduced too. There are the guys at the SIU all trying to continue on whilst Mackenzie is being investigated for her part in killing the vampire elders. There’s a new head vampire in town who clearly despises Kenz and thinks she got off lightly. Though she once again she proves to be tough enough to take any violence they dole out. Kenzie also shows she is stubborn and fiercely loyal to her friends and will not hear a wrong word said about old friend and exiled vampire Lucien.
Then we have the whole Bobby Wu and why he desperately wants the nymphs to need his help….and his anger when they go to the SIU for help rather than approaching him. There is a mystery man who is also facilitating Bobby Wu and his dark plans. On the light, good side is of course Bash, the Brooklyn Pack and once Bash calls him for help Waldo Wagner. Can the light & good win over dark & evil? And what price will poor Mackenzie have to pay this time?

As I said there are some newer characters featuring in this book, such as Kalia the head wood nymph, Waldo Wagner is also in this book and Ollie, Kenzie’s brother is in this book quite a lot too. Bobby Wu teleports himself and Kenz to see a strange authorative, arrogant man who seems to know a lot about her, but, who and more importantly what is he? And who is the something or someone that could and would hurt Mackenzie without the so called “protection” of Bobby Wu?
Mackenzie and Bash visit the local archivist for more information on their Anam Aonachd bond, what it means and how they can use it to their advantage. There’s not so much of the pack and its politics in this book, though when Kenz visits the new HQ for the Brookyln Pack there are still important wolves in the pack that are not keen on her and the baggage she brings with her to their pack. There is still some angst between Bash and Kenz as he finds it difficult to not be by her side and protect her from anyone and everything even though Kenz tells him and proves time after time she is a big kick-ass girl who can mostly take care of herself and almost anything anyone would like to throw her way. I did love how Kenz is a bit more understanding with Bash and his worrying about her in this book.

As always with the books in this series they are so well written as a reader you loathe having to put it down until the end! I love the relevant comments about Netflix, TV programmes and binge watching them along with comparisons of Vampires and Bella Swan from Twlight.

I find the descriptions amazing, you can really see what is being described easily and well. The description of Amy, “Amy’s fire engine-red hair was pulled into a messy bun and she wore a tank top that displayed her tatted sleeves in their full glory. She was a work of art.” I have to say I think Amy’s temper could also be compared to “fire engine red” too! The way the author describes Kenzie and Bash’s eyes, wow! I certainly think that Bash fills the top slot book boyfriend criteria brilliantly, with Jackson a close second of course. I also think some of the phrases in the book are so funny yet so “Mackenzie” like, “I leaned back on the sofa, placed my hands behind my head, and would have placed my feet on the table, but my mama raised me right.”
I could seriously go on and on and talk forever about this book and series. It’s definitely one of my top ten favourites.
My immediate thoughts upon finishing this brilliant book were Wow! Another amazing adventure or maybe I should say misadventure in the ever increasingly complicated life of Mackenzie Grey Maconnich. Just when I think I can't love this series anymore I read the next book and adore it and its character even more than before.