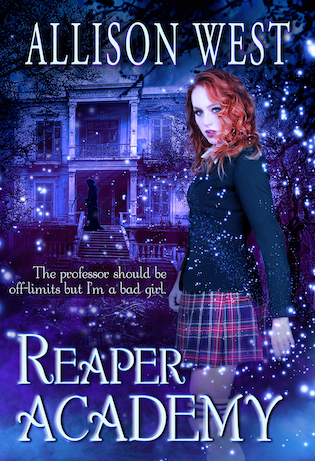 BLURB from Goodreads
The professor should be off-limits. But he’s hot. And I’m a bad girl. Lucky for me, he doesn’t play by the rules. Neither do I.

I used to be a princess; that was before I was murdered.

The reaper who took my soul. He’s my professor. And, well, the experience of taking a soul is quite… pleasurable. He wants me. I crave him. It’s against the rules, but do either of us care?

"We'll be fine." Leila had seen the invitee list a dozen times growing up. She knew everyone who showed and everyone invited who didn't. Wynter had been right, it would not be difficult to slip into the party. "Are we ready?"

"Almost." Wynter walked up to Leila and slid his hand into his pants pocket. He pulled out a necklace. The pendant was round and made from bronze. The center was a pleasant sea of rich purples and blues, mixed together with sparkles that dazzled in the light. Leila turned the charm in her hands, and the colors changed from each angle, revealing a warm mix of pink and orange hues like a gorgeous sunset. "Even though you're no longer a princess, you will always look royal." He took the pendant from her hands and fastened the antique bronze chain around her neck.

"Thank you." A real smile met her lips. She hadn't felt this content since before she died. He had a way of making her feel special. Had he done that with all his students or just her? She hadn't noticed his attention on anyone else.

"One last surprise." Wynter's eyes twinkled. He led the girls to the front door and opened it. Outside, waited a horse-drawn carriage. Jasper sat up front, ready to drive the coach.

"Where'd you get a carriage?" Leila asked.

Wynter offered his hand to Leila as she climbed into the carriage. He did the same for Violetta before he stepped in last.

"I doubt that. There's nothing wrong with the carriage," Leila mused, staring up at the ceiling. There were no holes, no evidence that it had toppled over and been smashed against the ground.

"It's what was wrong with the owners," Wynter said and sat back in the carriage beside Leila. "They died."

"Oh," Leila said, and the carriage jolted forward. The horses' hooves thumped against grass. "Jasper, did you steal this carriage from a reap?"

"I don't think he can hear you." Wynter grinned. "Yeah, he may have borrowed it. It's not like the guy will be needing it again. Besides, you can't arrive at the ball riding a horse. It would look unsophisticated. Trust me, we'd never get in."

Leila sighed. She hadn't thought about their arrival. "Just tonight. Then we return the carriage." She didn't want to risk the royal council finding out what they were up to. Not only were they crashing a ball, but they were also stealing from the dead. Were there any rules left that Leila hadn't broken?

"Are you nervous?" Wynter nudged her thigh with his leg.

"Why would I be?" Her knee bounced anxiously as her fingers twitched against her lap. She'd been trying to convince herself all afternoon that it was no big deal, Mara wouldn't recognize her.

"No reason at all." Wynter smiled. "We're going out tonight to have fun." 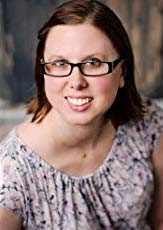 Allison West has been inventing worlds and writing stories for years. Her favorite novels are those that leave a lasting impression, long after the final page is read.
You can find more about Allison on Facebook, Twitter, and her blog "Spanking Author." http://spankingauthor.com