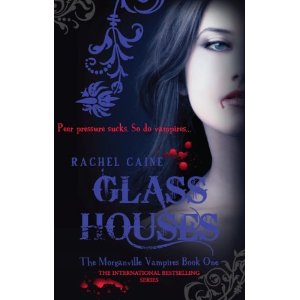 Glass Houses by Rachel Caine is book one in the rather addictive  Morganville Vampires series.
Morganville is a small college town...I suppose you would say much like any other, with its odd quirky characters in it. But in Morganville things are not what they seem, you see, when the sun goes down, the bad in Morganville come out! There is an evil that lurks in the shadows, and it wants to come out in the light of day. The main character, or should that be one of the main character Claire Danvers is attending the college, but she is fed up of the tormented time she is having in the dormitory. The popular girls will not let her forget that she is at the bottom of there social ladder, not only that they go out of their way to make life as difficult for Claire as possible. To be "someone" in Morganville you need to have the right connection.....the undead connections. You need to be under the protection of one of the undead to survive.
Claire decides enough is enough and heads off campus to try and find a safer, friendlier place to stay. Thats when she ends up at The Old House. Her new roomates are the type you would want as friends, they will watch over and help Claire when the towns secrets are revealed and those in the darkness come out.
Lots of twists and turns in this first book. it is the book that sets the scene for the rest. it tells of the bullying that Claire has to endure on a daily if not hourly basis whilst staying in the dorm. In desperation she fless the dorm and ends up at The Old House..... even that is more than it at first seems to be.
if you love vampires you will want to read this series of books, the adventures just keep on happening. The book is full of interesting characters with dark secrets and human characters with secrets and hang ups of their own. It is again aimed at the Teen/YA market but I still enjoyed the series.....