Club Dead is book three in the Sookie Stackhouse series by Charlaine Harris. 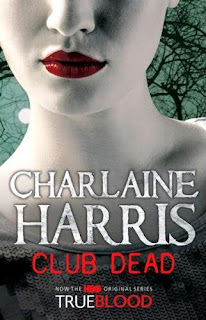 Things between cocktail waitress Sookie and her vampire boyfriend Bill seem to be going really well (apart from the small matter of him being undead) until he leaves town for a while.He is gong a long while. Bill's sinister boss Eric has an idea of where to find him, and takes Sookie off to Jackson, Mississippi to mingle with the vampire underworld at Club Dead. When Sookie finally catches up with Bill, he is in big trouble and caught in an act of serious betrayal. This raises serious doubts for Sookie as to whether she should save him or start sharpening a few stakes of her own . . . . .
Still enjoying reading this often humorous series. You genuinely want things to go well for Sookie and Bill.