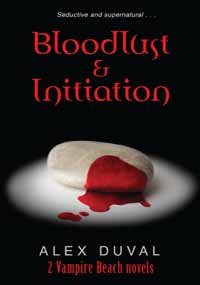 Bloodlust is the first book of the series and initially centres around the character of Jason Freeman who thinks life is going to change enormously for the better when his parents announce that they are all moving to the very exclusive DeVere Heights in Malibu. The "in" popular people at his new school are so friendly, Jason is soon invited to all the best parties.Jason is so determined to enjoy this new "high life" that he ignores the strange things and niggling doubts he has about DeVere Heights. Jason has to rethink his not wanting to know about the strangeness in DeVere Heights when a girl is washed up on the beach dead with suspicious looking bite marks on her neck.
Initiation the second book of the Vampire Beach series In this book Jason has got the hang of things in DeVere Heights when an old friend from his past turns up, Tyler. It turns out that Tyler is on the run from something. Tyler doesn't know the secret of DeVere Heights and ends up putting himself in serious danger.

I bought this paperback with book one and book two in, and did enjoy it. it was a steady, at times slow pace, you of course immediately guessed the secret of DeVere Heights almost straight away so it was a touch frustrating that Jason and his family were in the dark so to speak. The characters were good, kind of believable for such a fantasy type book. Like I said I enjoyed it, it didn't take long to read , it was an inoffensive vampire story that was good but not wow!