THE BRINGER BY SAMANTHA TOWLE

The Bringer by Samantha Towle is featured in my Awesome August 100 Follower Giveaway http://jeanzbookreadnreview.blogspot.com/2011/08/e-book-giveaway-when-we-reach-100.html I am also hoping to soon have an interview with Samantha, a fellow Yorkshire lass! 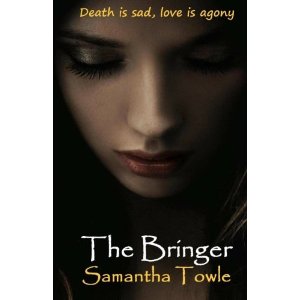 Love is agony and Death is sad.
Max was her next job. She got his name just before he died, it was her job to bring his soul to heaven. Then Max began his pleading (as they often do) but Max was pleading for his son James not himself as was usually the case.
Max pleaded. Would she look after James? Would she be there to comfort him as he grieved for the loss of his father? James was a sensitive young man, and would take his father's death very hard.
Bringers don't actually do that sort of thing,they are not allowed to be involved in earthly matters.
When the Bringer saw James she felt something she had never felt before, an emotion. Bringers don't have emotions, yet she really couldn't help herself. She was drawn to James against every instinct she had ever had, and against every law of the universe. She fell in love, a very large fall for a Bringer to take.
Well I really enjoyed the new concept of the Bringer taking you to heaven not an angel. I also thought the eternal love of the Bringer Lucyna and Arran/James was really well done , not too slushy! I read a little snippet on my kindle one night then the second night I sat and read the rest as I wanted to know what was going to happen. There are angels in this story both good and bad, as well as characters who are not who they at first seem to be, it all adds to the mystery of what will happen. As you will know by now I don't include spoilers in my reviews as I wish others to read and enjoy the book as I have, but I will say I love a happy ending! So buy, buy.buy the book! The cover alone would have made me want to read more about the book.
Posted by Jeanz xx at 10:03