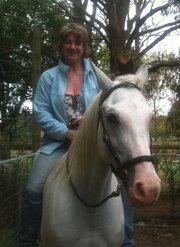 What is your name, where were you born and where do you live now?
My name is Ann Nyland. I am of Scottish, Irish and Welsh descent and was born in . I have recently moved from the mountains in northern NSW to the coast in , NSW, .

What is the name of your latest book, and if you had to summarise it in less than 20 words what would you say?
I'd say that would be hard, and ask if I may have 105 words please? The name of my latest book is The Dashwood Haunting.
Amy Stuart is a journalist and blogger for a paranormal magazine.
She doesn't wear black leather; she can't kick butt; she doesn't have supernatural powers.
But she does have one skill: while wearing shapewear and with her reading glasses perched on her nose, she can out-research the best of them, especially when her caffeine levels are high.
When sent to to write articles on Sir Francis Dashwood's Hellfire Club, Amy uncovers a link between the alchemist Nicholas Flamel, the nineteenth century occultists and the which endangers her own life. Can her research skills save the world from at least one dastardly killer?

Do you have plans for a new book? Is this book part of a series?
The Dashwood Haunting is the first book in the Amy Stuart, Paranormal Blogger series. The second book in the series is The Ghosts of Morpeth and it will be released in September 2011. The third book, The Vampire Code, will also be released in 2011. It is not at all the usual vampire novel.

How long have you been writing?, and who or what inspired you to write?
I began writing at an early age. I started serious writing as a postgrad student, and when I was on Faculty at an Australian university I had to churn out a lot of stuff as the saying "publish or perish" is quite true. My first academic Journal article was I think in the Journal of Near Eastern Studies. Prior to that I had written countless magazine articles.

Have you ever based characters on people you know or based events on things that have happened to you?
Absolutely, particularly in my sci fi / time travel / fae novel Hedgeland. The "Present" section of Hedgeland is largely autobiographical and I also wanted this as a literary effect. In the book, my former housemate harassed me to write a novel, and this actually happened. I'm the character "April" in the Present section, and I have had dreams exactly as I describe in the book.

Hedgeland weaves three realms, past, present and future. The characters in the "Present" realm are based on real people. I based the "Present" on my own reality and the "Past" realm on actual dreams I've had since I was a young child.

Is there a certain Author that influenced you in writing?
I love anyone from Classical Greece except Plato and Thucydides. Homer is my favorite author. I am also fond of ancient Greek and Roman pastoral poetry. I love JK Rowling's twists, and I like the way in which Kathy Reichs incorporates actual historical / scientific information into her novels.

Which format of book do you prefer, ebook, hardback, or paperback?
I prefer ebooks as they are cheap and I can get them quickly. I like everything in life to happen quickly, and if I see a book I like, I can have it within seconds.

Do you think books transfer to movies well? Which is your favourite/worst book to movie transfer?
My favourite book to movie transfers are Hamlet, Blade Runner, Lord of the Rings and Apocalypse Now, and one of the worst in my opinion would be Dune. I did not like , just as I'm a bit of fanatic about history, and I also thought that the film The Hitchhiker's Guide to the Galaxy was a terrible adaptation.

Is there a book you know you will never read? Or one you tried to read but just couldn't finish?
I cannot read books which have appalling grammar. I don't mind comma splices or split infinitives and suchlike, but cannot abide incorrect verb agreement and other serious basic errors, especially not when there are numerous examples per page.

What do you think about book trailers?
I love book trailers. I do not have any as yet, but I'm working on it.

What piece of advice would you give to a new writer?
A manuscript assessment service is invaluable. If you decide to go indie, make sure you use the services of an editor.

Thank you for taking the time to do this interview allowing us a glimpse into your writing world.
Posted by Jeanz xx at 13:41