Shanlini Boland wrote Outside, and Hidden (The Marchwood Series) 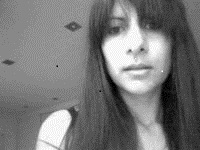 Shalini Boland, born in London, but I now live on the South Coast of England.
OUTSIDE is a post-apocalyptic romance thriller. Riley leaves the safety of The Perimeter to hunt her sister's killer across a decimated Britain.
I’m currently writing books 2 and 3 to my other series Hidden (Marchwood Vampire Series). When I’ve finished those I’ll carry on with the sequel to Outside.
I’ve been writing novels since 2004, but didn’t get serious about publishing them until this year. I had an idea for a great ending to a book and that’s what inspired me to start writing.
I initially come up with an idea. Then I search for an image to go with that idea. Finally my graphic designer friend, Simon Tucker, transfers my image into a super duper book cover.
There’s no single author. I must have read hundreds of books over the years and I guess I’ve been influenced by all of them to some degree.
I recently got a Kindle and it’s great! But I don’t prefer one format over the other. I’d probably choose to buy ebooks over print books now, purely for convenience.
The Bronze Horzeman trilogy by Paullina Simons. It’s a sweeping epic historical romance set in Leningrad during WW2. I just love the emotion and atmosphere of it. I’ve read it twice and I’ll probably read it again.
Some do and some do not! It all depends on the vision of the director, the strength of the script and the quality of the actors. There’s nothing more disappointing than a bad movie adaptation. It can ruin the magic of a book. But when it’s done well – it’s amazing.
Best movie transfer – Let The Right One In
Worst – The Golden Compass (beautiful but lacked the soul of the book)
I’m reading The Secret River by Kate Grenville. It’s brilliantly written, interesting and a great story.
I’m usually pretty persistent and hate to leave a book part way through. There are a few where I’ve thought: well that was a waste of time.
Here are a couple I’m enjoying: Johanna Frappier for her feisty characters and great stories. And Suzy Turner for intrigue, mystery and adventure.
Shalini’s Links:
Facebook: http://www.facebook.com/Outside.series
My Blog: http://someonewotwrites.blogspot.com/p/outside.html
Twitter: http://twitter.com/#!/ShaliniBoland
OUTSIDE is available from the following places:
Amazon US: http://www.amazon.com/OUTSIDE-ebook/dp/B005DLQC0I/
Amazon UK: https://www.amazon.co.uk/OUTSIDE-ebook/dp/B005DLQC0I/
Barnes & Noble for the Nook: http://www.barnesandnoble.com/w/outside-shalini-boland/1104562012
Smashwords: http://www.smashwords.com/books/view/75141

Thank you for taking the time to do this interview.
Posted by Jeanz xx at 15:19