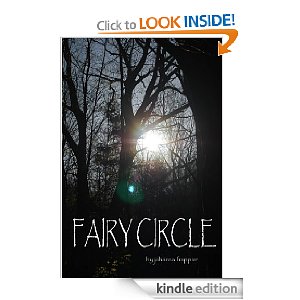 Fairy Circle by Johanna Frappier.
This books central Character is named Saffron Keller. Saffron has just finished high school, her mother Audrey wants to know what her life plan is. Basically Saffron doesn't have one, she doesn't even want to leave her own backyard.  Audrey nags and nags until Saffron takes a job in a store as a clerk. At night Saffron has weird dreams, that have fairies and other such creatures in them. She also sleepwalks around the time of the full moon so has to be watched so that she comes to no harm. The book looks at the people in Saffron's life and her relationships with them too. I don't want to go into detail for fear of giving spoilers. At times I wished the book moved at a faster pace but, that is just my own taste. I found the way in which it was written similar to the books by Lauren Kate. I think the cover is really good and draws you to the book. Its not the usual type of book I would read, even though the cover did attract me to it.

Available from Amazon.com, Amazon.co.uk £2.14  and Smashwords.com